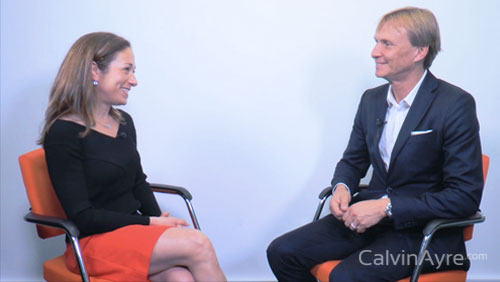 NetEnt is one of the biggest and most successful suppliers in the online gambling industry today and the company is still going strong.  Known for their flashy new product reveals at ICE Totally Gaming each year, NetEnt has nurtured an internal culture of innovation, quality, consistency and success.

NetEnt has exploded onto the iGaming software provider scene and now sits up there with the likes of Playtech and other legacy providers.  Exceptional Q1 2016 results are further proof NetEnt CEO Per Eriksson and his team are doing something right, so I caught up with Eriksson while he was in London last week to find out exactly how they’re doing it.

The UK market is a notoriously difficult one to penetrate due to its popularity and saturation, yet NetEnt is making headway in the UK and their market share targets in the region are aggressive.

“The UK market is the biggest market in Europe and very important for us.  We were quite late in, so therefore we have great growth opportunities.  We just reached double-digit market share and in Europe we have 31% market share so our aim is to get at least 30% here in the UK as well”, Eriksson said.

He added, “In Q1 we grew over 33% and we need a market like the UK for continued good growth”.

As luck would have it, earlier this week NetEnt announced a London-based winner of their £3,000,000 jackpot on the Mega Fortune Dreams slot via LeoVegas.com, a good start to continuing UK market growth.

NetEnt are currently developing a new live casino mobile product, one they feel will be superior to the other offerings out there and one that will also help grow NetEnt’s presence in UK.

“We are launching the mobile product in the second half of this year.  We see that this is something we have been missing to really become one of the big players in the live casino arena”, Eriksson explained.

We’ve all heard the saying “its better late than never”, but in this case, Eriksson believes launching a live casino mobile product later is, in fact, an advantage.

“The good thing with being late is you can look at what the competitors have and you can use the latest technology which we are going to do, so our live casino product is going to be something completely different than to what we have seen so far in the live casino industry”, he shared.

Eriksson added, “You will, for example, be able to watch it both in portrait mode and landscape mode.  You will be able to see things much clearer because of the streaming capacity and so on.  So its an amazing product we are going to launch”.

“At the beginning of this year, its very much thanks to our good Q1 numbers, we had the Guns ‘N Roses release and that was the best launch we’ve ever had for slots games.  I was very excited.  In September we will see the Motorhead slot and that will be something different as well”, Eriksson said.

Eriksson mentioned the good timing of the releases, with Guns ‘N Roses getting together again and performing along with the death of Lemmy, founder of Motorhead, meaning both brands are currently hot and in the spotlight.

To inspire and encourage innovation within the organization, NetEnt hosts an annual five-day “innovation week” for employees with the last one taking place in March 2016.  During innovation week employees submit creative ideas and learn from internal and external leaders.  The employee who comes up with the “winning” idea is awarded a trip to Las Vegas during G2E.

“The whole week is just a very exciting week where you get a lot of creativity, people from outside coming in and giving us lectures about many different things so we get inspiration”, said Eriksson.

He continued, “We got over 60 new, good ideas that came in and at the end of the week we have a dragon’s den where its not just me, its board members, people from outside as well, sitting there as the dragons, and the winner this year was a feature on live casino that I can’t tell you now”.

One of the previous innovation week winners came up with an analytics tool for testing new slots.

“We can tell our operators that [the slot] will be a blockbuster already before it is launched.  For example, Guns ‘N Roses, we knew that was going to be a blockbuster and it was.  So things that come out of innovation week are super interesting.  That is the NetEnt culture, that is why its so cool to work for NetEnt”, Eriksson said.

Another area of anticipated growth for NetEnt is the regulated US market despite its slow progression.

“We have a lot of traction in New Jersey, we launched our games in October of last year and we have gained already significant market share there.  So we’re really excited and we really hope that we will see more states opening up now”, Eriksson said.

He continued, “It looks like Pennsylvania will be the next state, I was there a couple of weeks ago talking to the regulators and it looks quite positive, but still you never know how long it takes.  But Pennsylvania would be a fantastic state, its bigger than New Jersey and it would also give us some extra momentum there on the East Coast, so I’m very excited about that “.