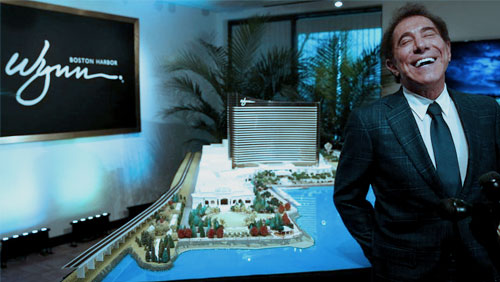 Only one obstacle left before Steve Wynn can finally build his Boston Harbor project.

On Monday, city officials issued a building permit to casino operator Wynn Resorts for its proposed $2 billion casino development in Everett, the Boston Herald has reported. Mayor Carlo DeMaria called the permit “a major milestone” for the casino company, and “another positive step forward for Everett and beyond.”

There wasn’t a doubt that the city, which had been eagerly waiting for the project to proceed “for years,” will greenlight the casino development. But the permit also signifies that Wynn is all set to build the “24-story curved-glass hotel and vast casino,” provided that it clears the final regulatory huddle—Somerville Mayor Joseph Curtatone.

Early this year, the casino operator was forced to put on hold work on the site, including the removal of contaminants such as lead and arsenic on the long-condemned 33-acre site, after Curtatone filed an appeal questioning the environmental permit that Wynn Everett received from the Department of Environmental Protection.

The Somerville mayor pointed out that Wynn Resorts “must do more to offset the casino’s environmental impact.” The casino operator is already on the hook for $36 million to improve traffic on Charlestown’s Sullivan Square, but the Massachusetts Gaming Commission recently ordered Wynn Resorts to pay extra to alleviate the traffic concerns in areas surrounding the casino.

A hearing for the Somerville appeal is scheduled for June 2, a month before Wynn’s plans to break ground on the project.

Over in Macau, subsidiary Wynn Macau Ltd. continues to shoot for a Cotai resort opening date in “the third quarter of 2016.”

In a filing with the Hong Kong Stock Exchange, the company said its “general contractor is obligated to substantially complete the project in the first half of 2016 for a guaranteed maximum price (GMP) of HK$20.6 billion (US$2.7 billion).”

Wynn Resorts pushed back the opening of the Cotai Palace to June 2016 after its general contractor, CIMIC Group Limited (formerly Leighton Holdings Limited) asked for an extension as well as for a reversal of liquidated damages and additional compensation.

CIMIC won the $2.5 billion contract in 2013, but it notified Wynn Resorts late last year that it couldn’t complete the casino resort in time for the original March 25 opening, prompting the casino company to add extra three months to its contractor’s deadline.

Plans for the $4.1 billion Cotai Palace resort include 1,700 hotel rooms, a lake with gondolas and fountains, meeting space, a casino, a spa, stores, and food and beverage outlets.