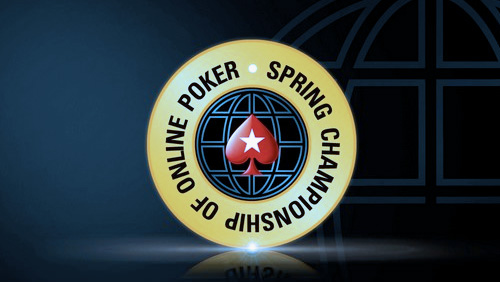 ONCHAN, Isle of Man – May 5, 2016 – The 2016 Spring Championship of Online Poker begins in three days, and for the first time poker players and fans will be able to root for and bet on their favourite Team Pros, as PokerStars, an Amaya Inc. (Nasdaq: AYA; TSX: AYA) brand, has introduced a dedicated SCOOP 2016 Team PokerStars Leaderboard, with BetStars offering odds on the winner.

In addition to wagers that people can make on BetStars, Jason Mercier and George Danzer have made a $10,000 heads-up bet between themselves on who will finish higher on the SCOOP 2016 Team PokerStars Leaderboard.

More than 30 Team PokerStars Pros will take part in SCOOP 2016, pitting their poker wits and tournament strategies against each other in a battle to be named number one Team PokerStars Pro for SCOOP 2016. The leaderboard will be posted on the PokerStars Blog – http://psta.rs/1W9OHUw – and updated at regular intervals, with revised odds on BetStars as the series progresses.

Mercier said: “Last year was amazing, winning the three titles and Player of the Year. I really love SCOOP!  I’ll play as many events as I can and whether it’s a $200 event or a $20,000 one, I’m always focused on finishing first. The addition of the Team PokerStars leaderboard, the $10k side bet with George, and earning bragging rights over some of my best poker friends, will be an extra incentive to take the top spot.”

George Danzer, who also has four SCOOP titles and the most cashes of any player in SCOOP history with 148 (40 more than fellow Team Pro Marcin ‘Goral’ Horecki in second), will be vying to come top of the Team PokerStars Leaderboard, too.

Danzer said: “I’ve had some great success in SCOOP and was so close to being the Player of the Series a couple of years ago, so I’ll be trying my best to go one better this time. The extra spice and competition that the Team PokerStars Leaderboard, my side bet with Jason, and the betting maket adds, will make for an exciting couple of weeks.”

SCOOP SCHEDULE
SCOOP 2016, which takes place from May 8-22*, will feature a record 55 events this year – an increase of nine on last year – making for a total of 165 tournaments across three stakes (Low, Medium, High). The guaranteed prize pool is more than $40 million.

Online qualifiers to all the events are running now at PokerStars, with satellites starting from just $0.11 or 1 StarsCoin.

PLAYER OF THE SERIES LEADERBOARD
The most successful players across all three stakes levels will also be rewarded for their achievements with more than $100,000 in WCOOP tickets and cash to be given away. The winners of the Low, Medium and High Leaderboards will each receive a trophy, WCOOP Main Event ticket and $5,000 cash, while the SCOOP (Overall) winner will get a trophy and $20,000 cash. Hundreds of other WCOOP tickets, ranging from a $27 Deadline Turbo Ticket to a $2,100 WCOOP ticket, are available for players who reach the top spots on the leaderboards.

Aside from Mercier and Danzer’s prop  bet, the additional Team PokerStars Leaderboard is being contested solely for bragging rights, with no extra prizes available to be won.

About PokerStars
PokerStars operates the world’s most popular online poker sites, serving the global poker community. Since it launched in 2001, PokerStars has become the first choice of players all over the world, with more daily tournaments than anywhere else and with the best online security. More than 150 billion hands have been dealt on PokerStars, which is more than any other site.

PokerStars.com and PokerStars.eu operate globally under licenses from the Isle of Man and Malta governments, respectively. PokerStars also holds local licenses or approvals to offer services to players in many jurisdictions, including Italy, France, Estonia, Belgium, Denmark, Spain, Bulgaria, Greece, United Kingdom, Schleswig-Holstein in Germany, Ireland, Romania and New Jersey in the United States of America.

PokerStars is the flagship brand of Rational Group, which operates gaming-related businesses and brands, including PokerStars, Full Tilt and the European Poker Tour. In 2012, 2013 and 2014, Rational Group companies in the UK and Isle of Man was recognised as one of the top 25 best places to work by the Great Place to Work Institute’s Best Workplaces – Large category ranking. Rational Group entities in Costa Rica and Dublin also achieved the same accolade in their respective local rankings in 2014. PokerStars is ultimately owned by Amaya Inc. (Nasdaq: AYA; TSX: AYA).