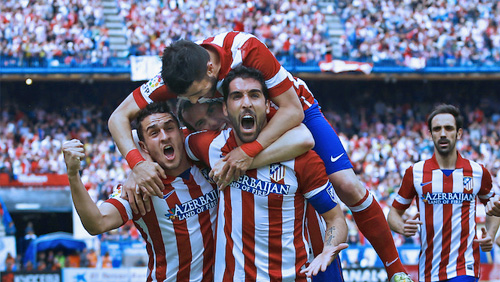 Atletico Madrid will face Real Madrid or Man City in the final of the Champions League after eliminating Bayern Munich on away goals courtesy of an Antoine Griezmann strike at the Allianz Arena.

Atletico Madrid will face Real Madrid or Manchester City in the final of the Champions League at the San Siro, 28 May.

Diego Simeone’s men have reached their second final in three years after defeating the highly fancied Bayern Munich, going through on away goals after a thrilling encounter at the Allianz Arena.

The loss means Pep Guardiola will leave his position at Bayern to join Man City knowing that he failed to deliver Europe’s top prize to the board that hired him to do so. It’s the Spaniard’s fourth consecutive loss at this stage of the competition. Man City will be hoping he leaves that particular bag back in Germany.

Atletico arrived for the second leg with a one-goal advantage courtesy of that scintillating solo goal by Saul at the Vincente Calderon one week ago. Most importantly, they kept Bayern out at the other end. There was no away goal for the Germans, and that would eventually lead to their downfall. Not only that, but they failed to create any serious chances in Spain.

Atletico is the toughest nut to crack. They haven’t conceded a goal in 602 minutes of football, and only Barcelona have beaten them on their travels during this year’s competition.

The first of those statistics fell in the 30th minute when the former Liverpool and Real Madrid star, Xabi Alonso, stepped up to strike a free kick from the edge of the box. The ball took a wicked deflection to wrong-foot Jan Oblak, and Bayern were all square.

It was all Bayern up until that point, and their dominance could have been cemented two minutes later when the referee judged Jose Giminez’s tug on the shirt of Javi Martinez as a foul inside the box. The referee awarded a penalty, and the reinstated Thomas Muller saw his spot-kick expertly saved by Oblak.

Within 10-minutes of the restart, there was trouble brewing in the Allianz Arena. Bayern’s failure to score that vital away goal meant they were always going to be susceptible to the sucker punch.

Fernando Torres put the Antoine Griezmann through on goal. The Frenchman looked offside, but 40-yards from goal, he still had plenty to do. He raced towards the penalty area leaving defenders in his wake; Manuel Neuer raced towards him from the Bayern goal, and Griezmann slotted the ball home from the edge of the area.

Munich was in dire straits knowing they needed to push forward to find two goals in the remaining 35-minutes, leaving themselves vulnerable to the pace and power of Griezmann and Torres.

In the 74th minute Bayern grabbed one of those precious goals when David Alaba crossed into the penalty area, Arturo Vidal flicked it on, and Robert Lewandowski arrived on cue to head home from inside the six-yard box.

Although Bayern was moving forward like a well-drilled machine, you always thought Atletico would get one more chance. That happened as we entered the last 10-minutes. The referee making a howler when he awarded Torres a penalty after Martinez clearly brought him down outside the box, but just like Muller earlier, Torres was unable to convert the spot kick after Neuer saved smartly.

In the end, it didn’t affect the result. The referee awarded five minutes of injury time, but Simeone’s men are the masters at wasting that time. Bayern didn’t get another opportunity after that and crashed out of from the semi-finals for the third year in a row.

And what next for Guardiola?

He gets ready to open a bottle of red, kick off those Gucci loafers, and watch his new team Man City try to do something that he has not done in a long time – make the final of the Champions League.