Home / Business / And the Least Bad Presidential Candidate for Gambling Is… 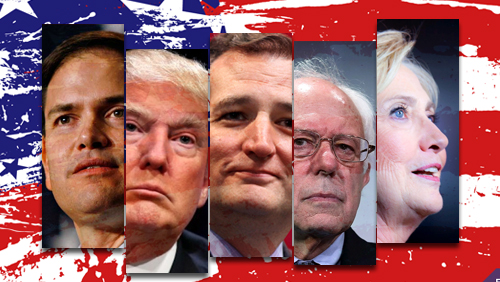 If we want to assess which presidential candidates would be best or least bad for the gaming industry, it’s tempting to just make a laundry list of each politician’s statements and/or votes on gaming issues, check their financial backers and where they stand, and then rank it all with some kind of algorithm. Or just guess. Google the issue and you’ll find a plethora of articles on each candidate and where they stand on the gambling industry.

But such one-dimensional analysis, while somewhat helpful, doesn’t go deep enough in determining who would be the best candidate for the gambling industry as a whole. For example, you could have one candidate who is, say, against a federal ban on online gambling. While that’s obviously a plus for the industry, if the same candidate wants to jack up corporate and capital gains and VAT taxes on everything that moves so he can pay to repave a bunch of roads and bridges that don’t need repaving just so he can look like he’s “doing something” and “stimulating the economy,” then that would not be good.

Or if a candidate once even owned a bunch of casinos himself and really knows the industry well and definitely would not support a federal ban, that candidate could still be really bad for the gaming industry if he, say, wants to ignite trade and tariff wars with countries he accuses of “stealing American jobs” by selling stuff to American consumers.

No matter how you look at it this election, there really are no clearly good candidates for the gambling industry. There might be least bad and worst, but that’s it. In any case, let’s take the three front-running Republicans and the two Democrats and maybe come out with an answer of who would be the least bad, comparatively.

Marco Rubio, AKA “Rubiobot” would probably be the worst of all possible choices for the gaming sector. Anyone last week who saw the exchange between this guy and Chris Christie, governor of New Jersey who helped make online gambling legal in his state, is fully aware that Rubio is a blank slate. Rubio was a literal broken record when he chanted a 20-second or so bit about Obama trying to purposely wreck the country, repeating the same thing three times almost word for word. The saddest part was that even after the second repeat when Christie called him out for repeating sound bites, he did it again, clearly flustered, not knowing what else to say.

Repeating yourself isn’t the problem though. It just illustrates a danger. The danger is, though it may only be an internet rumor, Sheldon Adelson is thought to be backing Rubio, probably because Rubio is basically Play Doh and Adelson can mold him however he wants to with a bunch of money. Adelson, of course, is vocally against any form of online gambling anywhere in the solar system, with the possible exception of Pluto, because Pluto is no longer considered a planet. Even if Rubio lowers taxes, he is probably the most likely to appease Adelson. Lower taxes won’t help if there is a ban.

On the one hand, Trump knows the gaming industry, and he knows it well. But that does not mean he’d be good for the gambling sector. On the plus side, he’s made vocal statements supporting online gaming, and he doesn’t seem to want to raise taxes much. The problem with Trump, besides being totally unpredictable, is that his bellicosity would not be good for any business, let alone gaming. He is a big time protectionist, and he’s an angry one, too. He talks about building a wall, but more than a physical wall, he would erect trade barriers fitted with barbed ware around the United States and tax imports up several different wazoos. Americans would be forced to pay more for their goods and services as competition is restricted and supply goes down, and consumers will have less money to gamble with. But inefficient domestic producers of goods and services would benefit at the expense of everyone else.

When Trump loses one scapegoat, he moves to another. He used to attack OPEC a lot for jacking up oil prices. Well, so much for that fantasy scapegoat with oil at $30 a barrel and OPEC pumping at full speed. Now he’s focusing all of his wrath on China, which would be the main target of his trade war. Aside from risking actual war if he does slap high tariffs on Chinese goods, a Trump presidency could destroy any chances of a decent Macau recovery next year, for four years. When you erect trade barriers, you hurt both economies involved in trade, and a trade war with China will not help Macau at all. So while Trump may seem like a good candidate for gambling, he may practically, be very bad.

There’s not much to say about Cruz regarding the gaming industry other than that he’s pro “States’ Rights” (what about individual rights?) so he would not interfere in a state deciding if it will legalize gambling or prohibit it. In that sense he’s kind of neutral. The dangerous thing about Cruz is that he supports a VAT, a value added tax. A VAT adds a tax at every stage of production, for every business, at every level. Even if theoretically Cruz would suck up less tax money than other candidates so businesses could actually grow, he would still add another needle into the vein that would never be removed, and the next guy to come into office can jack taxes right back up again, keeping the VAT.

Sanders voted yes on the Unlawful Internet Gambling Funding Prohibition Act of 2006. Would he support a federal ban on online gambling? Hard to say. The fact that Adelson wants the ban, that Adelson represents money in politics which Sanders is “against” even though he himself accepts plenty of money for his own campaign, implies that he would probably not support such a ban.

However, of all candidates, he would increase taxes the most, borrow the most, have the Fed inflate the most and generally spend the most of any candidate. This is assuming Trump doesn’t succeed in starting an actual war with China which would be much more expensive than any of Sanders’s plans. The good thing about Sanders is that his plans are so grandiose that he probably wouldn’t succeed at passing any of them, aside from the likelihood of the US government defaulting on its debt sometime in the next four years anyway. In that sense, old Bernie would probably not be too bad for the gambling industry, relatively speaking, provided he fails in passing most of his spending schemes.

Hillary voted in favor of the Unlawful Internet Gaming Enforcement Act, that law we all love with a sarcasm that knows no bounds. Despite this though, Mrs. Clinton may in fact be the best candidate for gambling companies just because she inspires such loathing among Republicans, and even some Democrats, that they would all be united in stopping any initiative she has at all. It would be total gridlock and few consequential bills would even get through Congress during her entire tenure. Hillary represents the status quo, or the devil you know, which is almost always better than the devil you don’t in politics.