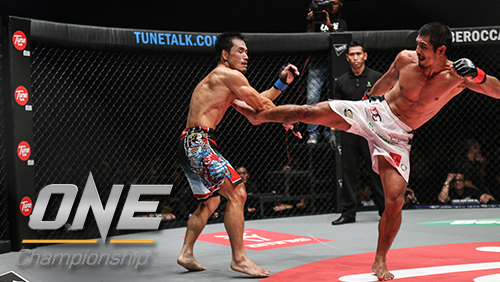 Filipino mixed martial artists have come a long way. Together with the fast rise of the sport, Filipino fighters have upped their games to be able to compete on the world stage. Focus on the grappling arts has taken priority while still maintaining signature striking capabilities.

Baguio City’s Eric “The Natural” Kelly (12-1) returns to the ONE Championship cage this Friday, January 29, at the Stadium Negara in Kuala Lumpur, Malaysia against hometown favorite Ev “E.T. Ting (10-3).

They will do battle in a three-round featherweight main event at ONE: CLASH OF HEROES that will bring the victor one step closer to a shot at the ONE Featherweight World Championship, held by reigning champion Marat “Cobra” Gafurov.

“Training has gone well. I feel great. I’m ready,” said Kelly. “I feel strong and ready to bring honor to my country.”

Kelly, considered one of the best Filipino fighters currently on offer, came very close to a title shot back in 2014, following his scintillating victory over “Ruthless” Rob Lisita wherein he overcame sheer exhaustion and a broken nose to seal the deal via rear naked choke.

The shot at ONE Championship gold never materialized and Kelly was left nursing injuries and spent some time away from competition.

For his efforts, Kelly was rewarded with the first and only $50,000 ONE Warrior Bonus to date, given to fighters who demonstrate an incredible warrior spirit.

There was no doubting Kelly’s warrior spirit that night as ‘The Natural’ was certainly on point. Kelly regards himself as a natural fighter, born to fight and compete in the cage.

Against Ting, Kelly will be going up against a highly-experienced opponent with a solid amateur background. Ting is one of the top contenders at featherweight and will be one of Kelly’s biggest tests.

“There are a lot of good fighters in my division,” said Kelly. “But I like it that way. It’s more challenging for me. I love challenging myself and testing my abilities.”

Ting on the other hand has faced a Kelly before, but it wasn’t Eric.

A few months after Eric’s epic battle with Lisita, Ting knocked out Eric’s younger brother Edward via a well-timed second round head kick. Eric was in the cage to console his brother and also to congratulate Ting on the victory, knowing that one day they would eventually meet to settle the score.

Kelly however maintains that this upcoming bout is not about vengeance, it’s just business.

“I have nothing personal against Ev Ting,” said Kelly. “I trained hard and like a natural for this fight so I am prepared to beat him. Even if he beat my brother, this isn’t about revenge. I would rather just do my best so that I can win and make my brother proud.”

A victory for either fighter will bring them an inch closer to a title shot. In a stacked featherweight division, Marat Gafurov remains supreme but interesting matchups lie ahead. If Eric Kelly can defeat Ev Ting, a long awaited title shot could be just over the horizon.

Nikolay Aleksakhin out to give Ben Askren his first defeat at ONE: GLOBAL RIVALS
Carlos Cinco
13 April 2016