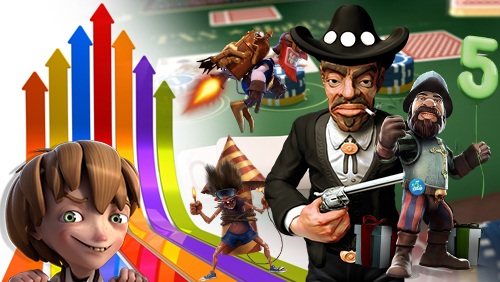 The case of NetEnt will set the tone for gaming investors in the next year or two. What happens with NetEnt’s stock this year will be very telling for how other gambling companies will perform in times of financial turmoil. This is because NetEnt is situated on two extremes. On the one hand, it is one of the most impressive gaming suppliers out there. Growth is spectacular, efficiency is top notch, its balance sheet is a model for financial responsibility for any company be it in the gaming sector or any other. Its products look like a lot of fun. They are colorful, they look exciting, and their games are tuned in to cultural trends.

On the other hand, NetEnt is in Sweden, where interest rates are negative, making asset prices there skewed. NetEnt will be a test case as to how funny money can affect good stocks. When monetary conditions in Sweden normalize, gaming investors should watch how NetEnt’s stock reacts to see how the value of fundamentally strong companies respond to stressful monetary environments.

The other disconcerting thing about Sweden is that it is progressing quickly towards a cashless society. Swedish banks have already begun systematically removing ATMs, and the use of notes and coin is down 20% since 2009. This may seem inconsequential and a trivial point, but it is a direct consequence of negative interest rates. Some Swedish banks don’t even accept cash deposits anymore. This will probably spread.

Negative interest rates mean that bank deposits shrink over time, which would prompt people to take them out and hold them as cash. That would prevent the central bank from lowering interest rates any further into negative territory, so cash is basically the people’s last weapon against inflationary policy. A run on the banks is the final defense against hyperinflation. Take away cash and central banks have literally no check on their policies.

Despite this, NetEnt is still one of the most efficient gaming companies currently operating. We can see this in terms of employees to market cap. The company employs 513 people and has a market cap of 18.9B SEK, giving it about £2.98M in market cap per employee in British pounds. By comparison, William Hill is at £209K per employee, 888 is at £495K, Paddy Power at £1.08K and Rank is at £105K. Equity per employee, while not a common rubric with which to measure the value of a company, does give an idea of both how high the valuation is and how efficient the workforce.

NetEnt blows its competitors out of the water in terms of efficiency of its workforce, but that could also mean the stock is simply expensive. NetEnt’s price to earnings is a very high 56.4, but that is excusable because it is a growth stock and a relatively new and successful company. Compared with Netflix at 305 and Amazon at 885, NetEnt’s P/E ratio is actually pretty low so there is still room for growth. The problem is, just because a few companies reach the stratosphere with P/E ratios doesn’t mean NetEnt will follow.

The good news though is hard to take with a grain of salt, simply because the numbers are so good. NetEnt signed 9 new customers last quarter including Gala Coral and New Jersey’s Golden Nugget. All operators in New Jersey are now signed with NetEnt, which has a market the size of Sweden. NetEnt is the first of its immediate competitors to enter the New Jersey market, giving it a possible edge if the beginnings go well. 6.6 billion transactions took place in the last quarter alone, which is 13 times more than the entire New York Stock Exchange in the same period. This is an amazing statistic. That needs one heck of a back office to be able to run smoothly, and NetEnt clearly has it.

Free cash flow has more than tripled in two years. Mobile growth is up from 23% to 28% of revenues quarter over quarter. The key with that statistic is that it is not growing at the expense of desktop revenue. Both show organic growth, and there is no net cannibalizing of revenues.

The only slightly worrying imbalance NetEnt suffers from is in its actual games. Slots represent 87%, of all revenues, while the rest are paltry. Roulette accounts for 6%, blackjack 4%, poker 1%, and all other games 2%. This means that NetEnt is almost entirely slots, which does give room for some pause. There is no problem with specializing in a particular kind of game though as long as the company is following demand, which it seems to be doing. At a certain point though, going with what works can be dangerous when innovation is needed to fend off competitors. Finding that point is up to the upper management. The hallmark of successful entrepreneurs is determining the answers to these kinds of questions, which can only be done through internal judgment and intuition.

NetEnt also likes to boast that all of its game releases have been on time. That’s a good thing, as long as they don’t try to maintain that reputation at the expense of releasing a crappy game, something which hasn’t happened yet.

Upcoming earnings look set to break records again. Last quarter and this quarter will see the launch of 26 new customers, which means a lot more revenues. Customers will probably be seamlessly added to back office operations, so operating costs should not go substantially higher than they are now, which means even more efficiency.

All said, the only relatively minor worry with NetEnt internally is that it’s very heavily reliant on slot games. Diversification would be more comforting, but the company should not pursue diversification for diversification’s sake just to comfort its shareholders. Stick with what works until there is an opportunity to break into something new.

The real worry is what happens with Sweden when interest rates return to positive territory. It could be that NetEnt won’t even be affected that much since most of its business is outside the country. But since negative interest rates have never really existed before, and artificially low interest rates are everywhere, it’s impossible to give an answer. Heck, the Fed raised rates by a quarter of a point and US stocks keep falling even with an increasing money supply, so we just don’t know. NetEnt should be followed closely to see how overall financial conditions affect the good gaming companies.