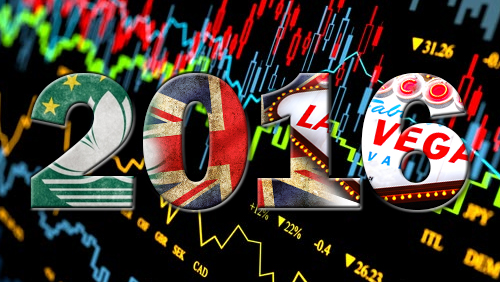 Well that was a wild start to the new year. Chinese indexes have collapsed over 7% in two days. The fact that there was no bounce today in the Shanghai Composite Index betrays serious market weakness. Nevertheless, we’ve seen last year that Macau stocks and mainland Chinese stocks are not necessarily correlated. China can crash and Macau stocks can trade independently for the short term. We saw this yesterday as Melco, Las Vegas Sands, and Wynn were only slightly down. Galaxy Entertainment was actually up.

This should not be misconstrued as showing complete independence between wider Chinese capital markets and Macau. Longer term, the lower Chinese shares go (and they have a long way down to go) the worse off Macau casinos will be. It is likely that much of the liquidity gamblers use in Macau is from stock market wealth, especially for the remaining VIPs who still manage to get money through, and this liquidity source is evaporating.

A bird’s eye view shows that Macau has two opposing forces influencing it that could pull it in either direction, theoretically. The ongoing “corruption crackdown” is the immediate catalyst of the fall since March 2014. If there is any sign that capital flow regulations are being liberalized by Beijing, then all Macau stocks will move much higher very quickly. But despite vague rumors of Beijing easing up on Macau since October, there is really nothing doing in that department.

On the other side there is the great monetary unwind, perhaps the biggest in history for an economy on the scale of China’s. The Yuan supply has been increased by a factor of 23.5 since the mid 90’s, an unprecedented inflationary expansion. The only thing that has stopped high price inflation since then is the equally unprecedented expansion of China’s economy. The more stuff in a country, the less that stuff costs. Increased money supply with increased stuff keeps prices generally level and mutes price inflation.

But now that the Yuan is included in the IMF’s special drawing rights (SDR) basket of currencies, Beijing cannot allow price inflation to get out of hand, or the Yuan may lose that coveted status. Besides, it would be a huge embarrassment for Beijing if the Yuan were to hyperinflate soon after being included in the SDR. That means the People’s Bank of China’s hands are tied. They cannot print all that much more money without pushing price inflation much higher, because the Chinese economy is stalling. More money with the same amount of stuff equals higher prices. They’ll try to ease a bit from time to time, but it won’t be sustained printing.

Considered together then, Macau stocks should still be avoided in 2016, because the likelihood of Beijing loosening its hold on Macau capital flows is very small. Once a government takes a self-righteous position that it is supposedly stopping crime by preventing money flows, it is unlikely that it will suddenly back down and admit that it was just being stupid. Yesterday’s crash and today’s lack of recovery in China also shows that the monetary unwind is proceeding apace.

On the small chance that Beijing’s Macau policy does change, however, Macau should no longer be shorted. One announcement from Xi Xinping about an end to the incredibly amazing and superbly successful and wise money laundering crackdown that has saved countless etc., will get you squeezed.

Las Vegas and the US in general is a different story. January through April is traditionally an expansionary time for the dollar supply. Judging by the most recent tables released by the Fed, even if the 1-week average stays stable for the next two months, the broader monetary trends will remain up. This is pretty much what happened last year (see the 1-week column in table 2) in the first quarter, and the year before. We can expect the same this year, with an added chance that we will see much faster monetary growth if the Federal Funds rate keeps rising and banks start loaning out the$2.5 trillion in excess reserves sitting in digital vaults at the Fed.

A collection of MGM, Penn, Pinnacle, Boyd, and other US gaming companies through April should do reasonably well then. For added safety, weigh the selection of US companies towards the ones with the best finances.

UK bookie operators should be safe for the first part of the year as well. Rank, 888, and Paddy Power should continue to do well. Ladbrokes could be a good pick also since it looks like its bottom is holding. Even bwin.party has nearly doubled since bottoming at 70 pence last April, though I can’t recommend buying it.

The UK is still fairly insulated from any Eurozone fiascos and it is on the outskirts of the Syrian refugee problem. There is nothing glaring about the UK pound sterling supply to suggest any incipient trouble, so the whole situation there is unremarkable. It should generally follow US gaming markets for the first quarter and perhaps a bit farther out.

For Q1 2016, a basket of US gaming companies together with Rank Group, 888, Paddy Power, and Ladbrokes should do reasonably well. Continue to avoid Macau for now. Though downside should be limited there, there is still the infamous example of Las Vegas Sands in 2008. From October 2007 to March 2009, LVS lost 99% of its value, which is a bit insane for a company its size that was not going bankrupt. Granted, both the US and China were crashing at the same time back then, so that probably won’t happen again. It’s just something to keep in mind if you’re feeling like trying to pick a Macau bottom.

Anything beyond April is a mystery, as monetary trends tend to change around then, and the set up this year is particularly weird given the excess reserves issue, which still has not been close to solved. Anything could happen later in the year, so we’ll cross that bridge when we get to it.