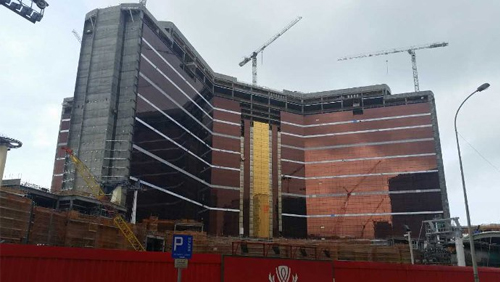 The casino operator announced on Wednesday that it was informed by its general contractor, Leighton Holdings Limited, that “the Wynn Palace project in the Cotai area of Macau will not be ready to open by the projected early completion date of March 25, 2016.”

“The revised opening date for the project is currently June 25, 2016,” Wynn Resorts said in a statement.

Analysts have already said there is a possibility that the Cotai resort will be delayed, partly due to the government’s slow pace when it comes to issuing the permits and also because of a shortage of construction workers, according to a GGRAsia report.

UBS Securities Asia Ltd. analysts, in a note sent to the news outlet, forecast the Wynn Palace to open in “mid-second quarter.” The analysts, however, believe the delay won’t make much of a difference since “two months less of revenue share gain will be partially offset by two months less of incremental operating costs.”

The new $4 billion casino will feature a large lake with fountain display, a casino, spa, shops, food and drink outlets and a 1,700-room hotel, which the casino operator said will make it “the most extravagant, beautiful hotel in the world.”

Much like the newly-opened Studio City resort, Wynn Palace is also poised to receive 250 gaming tables from the city state’s government. According to Union Gaming Securities Asia Ltd. analysts, there are only 1,097 tables left under the table games cap for the final four properties that will be shared for the final properties.

There are four remaining integrated resorts to open on Cotai: Wynn Palace, MGM China’s MGM Cotai and Sands China’s Parisian Macao, which are all scheduled to open in 2016, while SJM Holdings’ Lisboa Palace is expected to open in 2017.