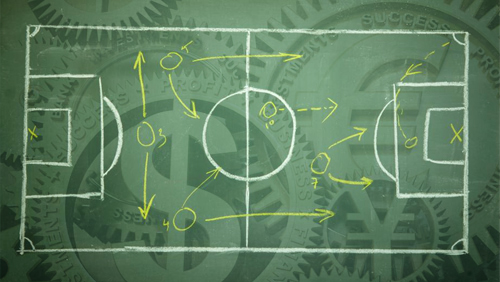 Amaya did a lot of complaining about the strong US Dollar that ate into earnings last quarter, but the real story has nothing to do with foreign exchange rates. It has to do with whether Amaya can leverage Pokerstars to grow its other verticals. The answer to that question will determine whether Amaya is simply an umbrella organization for a bunch of gaming assets, or really a force to maximize revenues for all its acquisitions. So far it isn’t a failure, but the signs do not leave me Pokerstarry eyed. (That was a good one, eh?)

First let’s get the dollar out of the way. Amaya complained that the rising dollar reduced its customers’ purchasing power by nearly 20%. That’s not exactly correct. It only reduced its customers’ power to purchase US dollar denominated goods. Since Amaya has its reports in US dollars, on paper it looks like it lost. The elephant in the room is that as soon as inflation heats up, and yes it is has taken a long time but eventually it will happen – the dollar will fall fast. All of Amaya’s paper losses at that point will reverse. Over the longer term this all evens out. In times of currency stress, it is a good idea to isolate and ignore that factor in order to see how a company is actually performing.

The drop in Amaya shares this month probably had little to do with traders concerned about currency fluctuations than it did with Amaya delaying major aspects of its sportsbook launch. Growing the other aspects of its gaming business is the raison d’être of Amaya acquiring Pokerstars in the first place. If it can’t get its Pokerstars players to move to its other offerings, then its leveraged buyouts will have been an exercise in benign asset collection for the fun of it.

The fact that they are delaying is probably prudent, because forcing a schedule when a product is not ready and then having it crash could be irreparable. Better to wait and take a smaller hit than release a product not ready for prime time. Amaya is hoping for a full launch by the middle of next year but did not fully commit to that timeframe.

Sports revenues have been growing, but so far it’s only $36M out of $325M last quarter. That’s 11%, and though it’s a start, Amaya will have to show much better numbers next year to satisfy shareholders. Keep in mind that its sportsbook is not yet profitable. Breaking into competitive markets like this requires deep discounting.

One slightly encouraging sign is that 14% of Q3 revenues come from Pokerstars Online Casino. This is up from 11% in Q2 and 6% in Q1, so there are some signs of life that the transfer of Pokerstars players is working somewhat, maybe anemically. 2016 will be the real test on whether this growth is scalable or whether its players prefer staying mostly where they are for sportsbook and casino.

Financially speaking, Amaya is handling its debt load reasonably well. Total debt has been reduced from $3.13B with an average interest rate of 6.4% to $2.6B at an average rate of $5.3B. Its higher interest debt has been reduced from $800M to $210M, a big paydown. The fact that Amaya is even considering a share buyback shows that there is enough cash flow to sustain debt service costs. There is a catch 22 though with this. The higher the dollar goes, the more stable the debt markets generally are. If Amaya is complaining about a strong dollar, then it should keep in mind that if the dollar weakens significantly, its debt service costs will rise in tandem.

Amaya has some plans for optimizing Pokerstars including new apps, tighter integration between PokerStars and Full Tilt, and eliminating hunting of new players by experienced gamers through automated table selection. Making new players comfortable is key for retention obviously, and these initiatives should do well but they are not the core of what shareholders are looking for. They want to see PokerStars players in casino and sportsbook.

Considering Amaya’s 33% fall since October and the fact that its latest report is not all that horrible, Amaya looks like a decent buy at current prices. We are entering a new boom phase in the money printing cycle in the US, as stocks in general there look set for another move upwards. Money supply broke past $12.25 trillion for the first time last week and we are headed into a seasonal period where money growth is generally strong. If you missed Amaya on the way up, buying now need not necessarily be a bet on its success in 2016, but merely its floating back near previous highs on inertia from general market momentum. Just that that could lead to gains of 30%.

Conservatively though, if you are not a believer in Amaya mastering sportsbook and casino, it could still be a good 10-15% trade at these numbers by March/April.

Amaya likes to make big acquisitions, but if I were them, I would wait to show shareholders some decent numbers for its other verticals before spending any more money collecting more assets. All in all, Amaya is still a wait and see, with market momentum making it a buy for a quick gain based on depressed prices now.