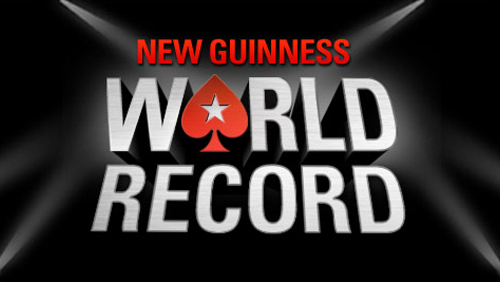 PokerStars has smashed their previous record for the Largest Online Poker Tournament, after their Common Cents tournament series starts off in amazing fashion.

Who on earth would want to take part in a poker tournament carrying a buy in of one cent?

That’s the official number of entrants that took part in the opening $0.01 buy-in event at the Common Cents tournament series being held on PokerStars. The gargantuan number smashed the previous Guinness World Record for ‘Largest Online Poker Tournament’ after 225,000 players took part in a $1 buy-in event to celebrate PokerStars 100 Billion Hands promotion back in 2013.

According to the Guinness World Record website, PokerStars, and PokerStars associated players hold a dominance over poker records. As well as holding the record for the ‘Largest Online Poker Tournament,’ they also hold the record for the ‘Most Players at an Internet Poker Room’  – after 307,016 players competed across 42,814 tables in Sep 2009.

Two members of the PokerStars team also hold records with Bertrand “ElkY” Grospellier holding the record for ‘Most Online Poker Tables Played in 1 Hour.’ The Frenchman played on 62 tables in 2009. He earned a $23.67 profit after competing in $6.50 Sit & Go’s.

PokerStars Team Online member Randy “nanonoko” Lew holds the record for ‘Most Online Poker Hands Played in 8hrs’. Lew played 14,548 hands and walked away with a $20.72 profit in 2012.

PokerStars don’t have the monopoly on poker related Guinness World Records. Paddy Power own the record for “Largest Strip Poker Game’ (of course they do) after 196 players stripped down to their birthday suits at the Cafe Royal London, 2006.

Phil Laak still holds the record for ‘Playing Poker Continuously’ after playing for 115 hours at the Bellagio in Las Vegas, 2010. Over 117,000 people tuned in to watch him play via online livestream feeds.

The World Series of Poker (WSOP) hold the record for the largest ever attended live poker tournament after 22,374 entrants participated in the 2015 Colossus, and the Asian Poker Tour and Resorts World Manila also hold a Guinness World Record for the ‘Longest Continuous Poker Tournament.’ The 2013 Iron Man Poker Challenge lasted 48hrs 55mins and 58.5secs, with Damon Shulenberger, from the USA, outlasting everyong to win the top prize of $18,240.

Do you want some more?

In January 2012, 209,000 people entered the 10k Kahit Isang Araw Lang Unity Run in the Philippines, 592,292 participants were involved in the ninth annual WSSA STACK UP! (A sporting event where people stack things on top of other things). The World Sport Stacking Organization organized the event in Nov 2014.

One of those aforementioned records was smashed during the Asian Poker Tour (APT) visit to Resorts World Manila, and the tour has announced they will be returning in April, 2016 for the 7th consecutive year.

The tour will drop anchor in Resorts World Manila April 13 to 21, 2016 and APT CEO Jeff Mann is delighted with the news:

“This is the APT’s 14th major international poker event to be held at RWM, which in total has involved thousands of players from over 40 countries; hundreds of individual tournaments and a combined prize pool from all these events exceeding well over USD$10m.”