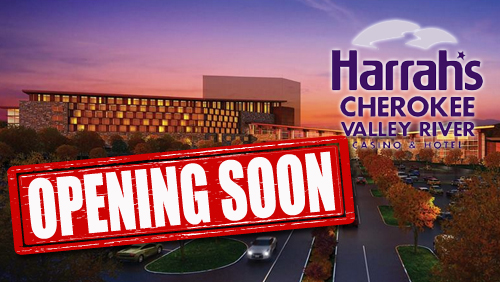 The North Carolina tribe of Cherokee Indians are set to launch its new casino, the Harrah’s Cherokee Valley River, to provide a further hold on the region as well as a boost in revenues.

The $110m casino, which is scheduled to open on September 28th, will be located in the western corner of the state at Murphy in Cherokee County. The casino will offer blackjack and slot gaming, bringing in more customers from the Atlanta, Knoxville and Chattanooga areas.

The tribe—the only casino operator in North Carolina—believes that the new Murphy site could cannibalize existing player traffic but should accommodate some overflow and draw gamblers in for day’s trips from neighboring states. The tribe’s gambling revenues have been increasing, which indicates that there is still room for the regional industry to grow.

The Eastern Band of Cherokee Indians’ outgoing principal chief, Michell Hicks, stated that research shows that the new casino has the potential to increase the market without harming the existing Harrah’s Cherokee Casino Resort on the Qualla Boundary.

Hicks also noted that 85% of its employees were not members of the Cherokee Tribe and the ratio should be higher after the new site opens, providing 900 employment positions in the area.

After the Spokane Tribe of Indians received federal approval to build a $400m casino on non-reservation land, its fate is now in the hands of Washington Governor Jay Inslee.

Assuming the project gets an okay from Inslee, it would feature not only a casino floor, but also a hotel and retail options.

Inslee, who has until 2016 to decide, is expected to make his decision within a month.

The Spokane Tribe purchased land in the suburb of Airway Heights and submitted its application to build a casino on non-reservation land in 2006 but the Interior Department did not grant the necessary permission until June this year. Officials explained that their decision was mainly based on the fact that such a development would be beneficial to the area as it would bring new jobs and funds for public services.

Tribal chairwoman Carol Evans said that its construction and operation would result in the creation of more than 5,000 jobs, noting that unemployment among the Spokane Tribe members has been exceeding 30% for years now.

Tribal officials have also pointed out that once fully operational, the casino would serve as a major contributor to the economy of the Spokane Tribe, supporting cultural and elder programs, and would provide funds for scholarships and health care.

The casino, which will be operated by the Hard Rock Hotel and Casino, received strong oppositions from Spokane business leaders and by the Kalispel Tribe, which already operates a lucrative casino in Airway Heights.