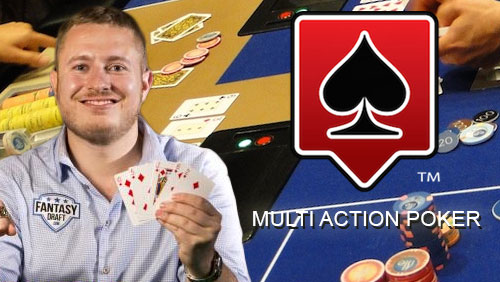 Three-time World Series of Poker bracelet winner, Brian Hastings, has shrugged off his recent online poker problems to join Multi Action Poker as a spokesperson for the company.

As far as sponsorship deals are concerned one would have thought Brian Hastings alleged NoelHayes shenanigans would have proven cataclysmic, but that doesn’t seem to be the case.

The three-time World Series of Poker bracelet winner is the latest professional poker player to become affiliated with Multi-Action Poker (MAP). A new form of poker that was unveiled at the Isle of Capri Casino in Pompano Beach Florida in May.

PAC Gaming CEO, Tim Frazin, invented the game and it provides double the fun for everyone involved. The play still takes place around a single table, but there are two dealers, two decks of cards, two sets of chips, and two different games.

When you watch the game in full flow it looks confusing, but the players seem to pick it up very quickly. Tables are lined with multi-colored areas so players and dealers alike can differentiate between the cards and chips of each game.

“We are excited to announce Brian as part of the MAP team,” said Frazin. “As a three-time bracelet winner and one of the all-time online money winners, Brian is a great addition to our growing team of top professional poker players.”

The game was first launch back in the spring. During that time Michael ‘The Grinder’ Mizrachi and Jennifer Harman were affiliated with the game as spokespersons. Former PokerNews sideline reporter, and now poker pro; Kristy Arnett has since been added to the team.