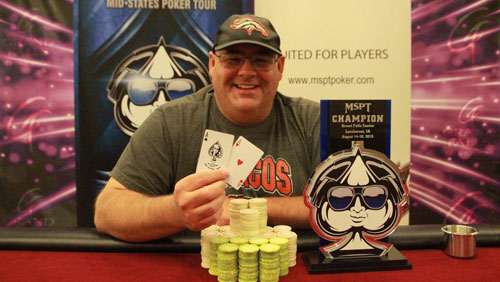 Alan Curl is the latest name to be bestowed the honor of winning a Mid-States Poker Tour (MSPT) Main Event after winning the $1,110 buy-in event at the Grand Falls Casino Resort in Larchwood, Iowa.

Curl started the final day with the chip lead, but it was Chris Burke who came into the final table sitting on the more heavily laden side of the felt. Burke was making his second MSPT final table, after finishing fifth in Sioux Falls back in 2012. He also finished fifth in the Heartland Poker Tour (HPT) final table in Deadwood back in 2009.

The first person eliminated from the 10-handed final table was the Day 1b chip leader Chuck Costanzo. He moved all-in from the small blind, holding QT, and was snapped off by Jon Maras in the big blind holding KJ – king high was good enough for the win.

Then we lost the only former MSPT champion to make the final table. Daniel Hendrickson jamming from the big blind, after Brian Davis had opened the cutoff. The call was made, and Hendrickson was in excellent shape holding AK against the KJhh of Davis, but a nasty run out saw hearts all over the turn and river to flush Hendrickson out of the contest.

John Streese was next to go after moving all-in on a flop of [9c] [7h] [7c], holding [Kc] [Qh]. Kim Rasmussen making the call holding AK and ace high made it to fifth street.

After Sam DeSilva went in fifth, Maras continued lopping off heads when he eliminated Burke in a blind on blind party. Burke moved all-in from the small holding Q6hh, and Maras called holding K2 in the big. The queen showed up on the flop to give Burke some hope, until the king on the turn extinguished it fairly quickly.

We reached the heads-up stage after Kim Rasmussen was eliminated in third place. This time Alan Curl weighed in with an elimination of his own. It was another cooler, with Rasmussen moving all in on the turn, after hitting two pair, only for Curl to be holding a straight.

The next MSPT stop will be held at the Tropicana in Evansville. The Main Event will carry with it a $250,000 guarantee.