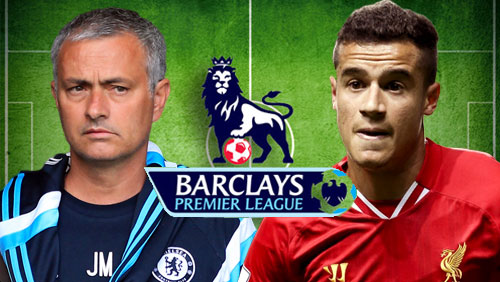 Lee Davy shares his view on Week 1 of the English Premier League, including a shock defeat for Arsenal, a late show from Liverpool and much more.

Jose Mourinho reminds me of Worzel Gummidge, the 1980s scarecrow who had a head for every occasion.

He is without doubt the best manager in the English Premier League. He can also be the strangest, the funniest and the most outrageous.

What head did he wear this week?

The head that complains about nothing.

If there is one thing that rubs me up the wrong way, it’s when a manager defends his team, or blames the officials, when it is clear that the best way forward is to own up to your own failings.

Swansea City, the only non-English team in the English Premier League, picked up their first point at Stamford Bridge since 1980 in their 2-2 draw. In truth, they could easily have trotted back up the M4 with all three points, and they haven’t done that since 1925.

So what was the inciting incident that Mourinho ‘didn’t want to talk about’ at the end of the game?

Chelsea’s Belgian keeper Thibaut Courtois upended Swansea’s Gomis, Michael Oliver sent him off, and Gomis got to his feet to slide the ball past Courtois’ replacement Begovic. The incident happened right on the line of the penalty box, but the whole world could see that it was the right decision; everyone except Mourinho.

Put a different hat on Jose.

It was a surprise result. You always expect Chelsea to win at home, but it wasn’t the biggest shock of the weekend. Arsenal stepped up to the plate to own that one, although a trip down memory lane tells a different tale.

Arsenal has only won one of their last six opening ties in the Premier League. West Ham was next up. Slaven Bilic taking charge for his first Premier League match at the Hammers helm. There was no danger. The weekend before Arsenal had looked title contenders after beating the champions Chelsea at Wembley. West Ham would be a walk over.

Last week I was raving about the signing of Petr Cech. The first link in Arsenal’s spine, and a strong one at that. This week he was like a jellyfish. The usually unflappable keeper was at fault for both goals. It will be a Premier League debut he would prefer to forget.

West Ham was outstanding. At only 16 years and 236 days Reece Oxford was sat at home watching Match of the Day when he got the call to say he would be playing. That is Roy of the Rovers stuff. Oxford was omniscient; Bilic even sent him out to talk to the press, such is his respect for the lad. He was the seventh youngest player to ever play in the Premier League. Matthew Briggs holds the record at 16 years and 68 days playing for Fulham.

The other outstanding player for the Hammers was their summer signing Dimitri Payet. The Frenchman arrived from Marseille for a fee of around £10m with Hammers co-chairman David Sullivan saying, “We have signed a world class player.” He looked it this weekend. He was strong, pacey and it was his free kick that led to the opening goal. Last season he created more chances than any other player in all top five European leagues with 135. Lionel Messi created 95. Keep your eye on him this season.

With Chelsea and Arsenal slipping up Louis Van Gaal should have been delighted with Man United’s scrappy 1-0 win against Spurs, at Old Trafford. He wasn’t though. The Dutch coach expected more. The usually possession hungry reds shared 50% with Spurs and the game was often on a knife-edge.

An own goal settled things. Kyle Walker tapping the ball into the back of the net before Wayne Rooney did. The biggest surprise was a place in the stands for David De Gea. Van Gaal said his mind wasn’t in the game, but you can’t help wondering if a deal with Real Madrid has already been ticked off the list. Sergio Romero took his spot and played outstanding, but should the young Spaniard leave he will be a big loss. It was the United game that provided the quote of the week when Spurs boss Mauricio Pochettino said that their biggest mistake was allowing United to score. Priceless.

With Man City hosting WBA on Monday, the last big time Charlie team to get a mention is Liverpool. It looked for the longest time as if they would play out a gutless goalless draw at Stoke. It was one of those games when you could have flipped a coin to pick a winner. But a moment of brilliance ensured all three points would be heading back to Anfield.

In the past two years Liverpool has lost Luis Suarez, Steven Gerrard, Raheem Sterling and the currently crocked Daniel Sturridge – four players who can win a game with a moment of brilliance. Fortunately, for Liverpool, Philippe Coutinho is made of the same stock, and he remains in the side. His long-range effort in the 85-min flew into the top of the net like a comet to give Liverpool a 1-0 victory.

Leicester currently leads the title charge after just one game. They may have lost their manager, but they continued their outstanding end of season form with a 4-2 victory over Sunderland. It could easily have been 6 or 7. Sunderland are woeful. Their defense looks like a Sunday pub league. It’s going to be a long hard season for Dick Advocaat’s men.

We even got to see Jamie Vardy score a goal. Quite why Roy Hodgson decided to call up a striker to the England squad, who never scores is beyond me, but he did put the ball in the back of the net in this one. Scant consolation after his mug appeared all over the Sunday papers after allegedly calling a bystander watching him play poker ‘a Jap.’

Norwich City is already in trouble with just one game gone. When you lose 3-1 at home to Crystal Palace you know you are fucked. The yo-yo club enjoyed the highs of last season, and they will hate the lows at the end of this one. Palace were great though. Yohan Cabaye could be the signing of the season. And in Yannick Bolasie they have something special. That’s if they can hold on to him with interest from Liverpool and Spurs growing.

Bournemouth was a picture book example of why Championship sides struggle in the Premier League. They hammered a very poor looking Aston Villa for most of the match. Could easily have been a few goals up and then, from nowhere, Rudy Gestede leapt higher than anyone else to thump the winning goal into the back of the net. Both of these teams are going to struggle this season.

Watford was the only newly promoted side to get a return this weekend. A point at Goodison Park is never one to be sniffed at. I don’t understand Everton. They have all of the hallmarks off a great team, but consistency is lacking. Ross Barkley underlined why he is one of England’s most exciting prospects with a cracking goal, but the game ended 2-2, after Chelsea target John Stones was turned inside out by Watford’s Ighalo. That made it 2-1 to Watford, but Everton went straight up the other end of the park and Kone stuck the ball in the back of the net to salvage a point.

Finally, Steve McClaren made a return to the Premier League with a tired looking point at home to Southampton. His Newcastle side running out of gas as the clock ticked down, and Mane could have, and should have, snatched the winner, with two amazing chances in injury time. In the end, he will be happy with the 2-2 draw. The look on the faces of the Saints players said it all. They were disappointed they didn’t win. That’s how far this team has come under the tutelage of Ronald Koeman.