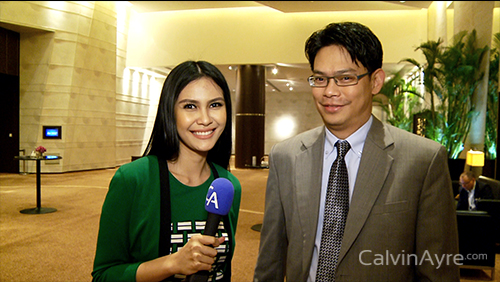 DFNN is forecasting a dramatic increase in EGM footprint with the rollout of its next-generation technology.

Technology solutions provider DFNN is poised to spread its wings beyond the Philippines with the rollout of its electronic gaming machines (EGM) technology.

In an interview with CalvinAyre.com, DFNN’s Christopher Tio said the company expects a “very dramatic impact” with its latest offering.

“We’re forecasting an increase of about 300 percent of EGM footprint at the very least. And if we’re able to achieve this, we believe that it will lay down the foundation to be one of the hottest gaming stores in Southeast Asia,” Tio said.

EGM footprint is measured in terms of people per machine (PPM). The Philippines currently has a PPM average of 10,000, BusinessWorld reported. In comparison, the PPM average for emerging markets is at 1,000, while the global PPM average stands at 300.

DFNN, which has been thriving mainly on non-gaming IT services, is steadily shifting its focus to the gaming business. The Philippine-based company boasts four gaming licenses from state-run agencies.

Still, Tio said iGaming in the Philippines can be a little tricky, what with the issues in legislation and state regulators.

“There are certain things needed for a full online experience to happen in the Philippines,” Tio said. “First of all, we need a credible backbone in terms of player registration. You wanna be sure that the right players play, (people with) right maturity levels play, and the right gaming responsibility protocols are implemented. And I think it’s a work in progress and we will definitely work with the regulator to come up with a responsible and efficient gaming implementing rules and guidelines to allow that to happen.”

The Philippines has recently become a major player in the international gambling industry with the rise of casino resorts, including the Resorts World Manila, Solaire Resort and the newly opened City of Dreams Manila, but if you ask Tio, the country still has a long way to go before it becomes a gambling capital.

“As a population matures, the population starts looking for more mature types of entertainment. And gaming, I feel, a healthy environment for healthy gaming is part of that mature entertainment side,” Tio said. “If you look at the demographics for the Philippine population, we’re a very young population and this young population is a very interactive population. They’re already on iPads, iPhones, (and) the rise of smartphones, so if the government doesn’t look into how to harness this into a responsible and efficient and vibrant market, it will seek its own way.”