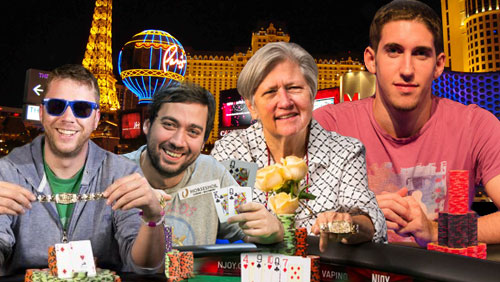 Lee Davy chucks a green juice down his throat whilst bringing you news from the 33rd day of the 46th Annual World Series of Poker: including a bracelet win for Kevin MacPhee, Jacqueline Scott becomes the second female winner of the series, and Daniel Colman is on familiar ground in the One Drop.

Kevin MacPhee is one hell of a poker player.

He has won titles all over the world, amassed over $4.1m in live tournament earnings and close to $7m playing online; but he badly wanted a World Series of Poker (WSOP) bracelet. He came close a few weeks ago, finishing fourth in a $1,500 No-Limit Hold’em event, and now he finally has one.

“I’m pretty used to this format. I play a lot of Turbo’s online, so for me it’s a pretty good event,” MacPhee told the WSOP after his win.

MacPhee’s game is going from strength to strength. In 2014, he finished the year with close to $900,000 in live tournament earnings, and he is already fast approaching that mark with half of the year to go.

Yaroshevskyy was no stranger to Turbo events himself. In the summer he won a €10,200 six-handed version of this event at the European Poker Tour (EPT) Grand Final in Monte Carlo for €218,300. He also placed fourth in the World Poker Tour (WPT) LA Poker Classic Main Event in February.

I played with Justin Liberto in the Millionaire Maker. He came to my table and run it ragged. You could tell that he was something special, and he has proved it by winning Event #51: $3,000 No-Limit Hold’em 6-Handed.

It was his sixth WSOP cash, and his second final table, after winning over $400,000 finishing fourth in the Millionaire Maker two years ago. He topped a field of over 1,043 players, a 29% increase in field size year-on-year, and his bracelet will look nice alongside his two WSOPC gold rings.

Jacquelyn Scott becomes the second female to win a bracelet at the 46th Annual WSOP, after topping a field of 795 entrants in the Ladies Championship.

The 66-year old realtor, from Florida, was the first person to ever sell a defibrillator in the US, when she worked as a medical sales representative, so she knows how to pump things up.

It was her first ever cash, and her heads-up match against Hope Williams was a cakewalk after she started with a 4:1 chip lead. Lacey Jones, Ebony Kenney and Marsha Wolek all cashed in the event.

Alexander Petersen Denies Jason Mercier His 2nd Bracelet of the summer in the $10,000 Pot-Limit Omaha Championship

Poker is a funny old game.

The final table of the $10,000 Pot-Limit Omaha Championships was littered with star names. Alexander Petersen wasn’t one of them, and yet he has probably played more PLO hands than anyone else with a bum on a seat.

The 31-year old pro from Denmark has been playing poker for a decade, and online PLO cash games for the past seven years, and he prevented Jason Mercier from winning his second bracelet of the series, after overcoming a Heads Up deficit to win his first gold bracelet.

Remarkably, this was Petersen’s first WSOP cash. But when you consider that he has to 55% tax you can perhaps understand why he prefers to lounge around the pool area when in town.

1,123 players entered the first incarnation of the 50/50 concept. It was also the first event to ever be sponsored by a third party. 562 players received a $1,000 kick back, and at the time of writing Ping Liu holds the chip lead with Mukul Pahuja and Matt Affleck looking dangerous.

Despite the smaller field there were a few people making the leap to the $100,000 buy-in level, most notably a trio from England: Simon Deadman, Craig McCorkell and Charles Carrel. Neither of them have lasted this far, with the only British presence in the field belonging to Talal Shakerchi.

Last years, controversial One Drop winner, Dan Colman, is leading the way, and Phil Hellmuth is hanging on to his coat tails. Brian Hastings, is also in the field. The American has been the subject of much controversy of late, and is searching for this third bracelet of the summer.

The winner will receive $3.9m and change.