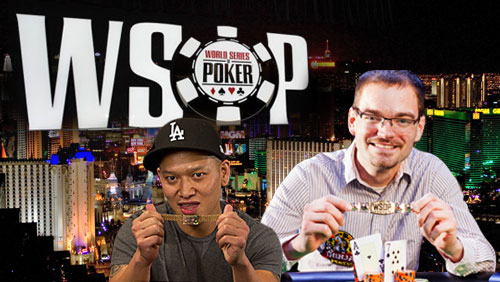 Lee Davy brings you a recap of the sixth day of action at the 46th Annual World Series of Poker. News stories include a gold bracelet for John Reading, a sterling defense of his 2-7 Triple Draw title by Tuan Le, and we get to the business end of The Colossus.

John Reading is having quite a year.

Back in April, Reading earned a World Series of Poker Circuit (WSOPC) gold ring, when he defeated Marvin Rumery, in heads-up action, to win the Omaha Hi-Lo 8 or Better title at Horseshoe Council Bluffs.

Yesterday, he added a World Series of Poker (WSOP) gold bracelet to that ring, after blazing through one of the fastest final tables in WSOP history, taking the title in less than two hours.

Event #6: $1,000 Hyper Hold’em was the new kid on the block. It attracted 1,436 players. Proof personified that the grinders love this kind of structure. Reading himself admitting that he felt incredibly comfortable having played this type of event thousands of times online.

It took just two days to cut that 1,436 players down to just Reading. 20-minute blinds will do that. He defeated Marc MacDonnell in heads-up action. The Irishman becoming the highest placed non-American at the WSOP thus far.

Hollywood star, James Woods, continued to show the world he knows a thing or two about poker. Days after making the final table of the $3,000 Shootout, he made another deep run in this one with a 37th place finish. Other notables in the money were: David Vamplew (17th), Matt Marafioti (26th), Roberto Romanello (28th), Jason Mercier (29th), Aaron Jones (33rd), and former WSOP Champion and Player of the Year Greg Merson (35th).

After three days of action there are 39-players left in The Colossus. It’s hoped that a champion will be crowned when the action gets underway at 2pm today.

That controversial $638,880 first prize suddenly doesn’t look too bad. The remaining players are all guaranteed $23,022 no matter what happens in the next 24-hours.

Ray Henson leads with 7,420,000, and he knows how to wade through huge fields. In January he defeated a record 4,053 players, including avenging an early career heads-up defeat by T.J. Cloutier, when he won the WSOPC gold ring in Choctaw.

What a story we have brewing in the $10,000 Limit Triple Draw Lowball Championship, and what a final table line-up.

In 2014, Tuan Le came from nowhere to pick up the first prize of $355,324 in this very event. It wasn’t easy: Justin Bonomo, Eli Elezra, Nick Schulman, George Danzer, Phil Galfond and Sergey Rybachenko all know a thing or two about poker.

Amazingly, Le is on course to defend that title, after he leads the final seven players. Once again it’s a final table full of quality. Recent Spring Championships of Online Poker (SCOOP) winners Calvin Anderson and James Obst are in contention, as is Rep Porter and Ismael Bojang. WSOP bracelet holder Phil Galfond makes the final table for the second successive year.

Event #8 is a welcome sight to the 46th Annual WSOP, because it’s the first event where the field has grown in contrast to its previous year. Gregory Kolo took the title, when he beat 557 entrants in 2014, and the 639 that entered this year means we have a 15% increase in field size.

108 players have made it through to Day 2, with Michael Rocco in the lead. Here are the top five chip counts at the end of Day 1.

This is the event that last year saw Ted Forrest win his sixth gold bracelet, whilst at the same time denying Phil Hellmuth from winning bracelet number 14.

352 players entered last year, and 462 entrants this year means the event has grown by 31%. There are 169 remaining after the first day of action. Here are the top five chip counts. James Woods is once again working his way to the top end of those counts.