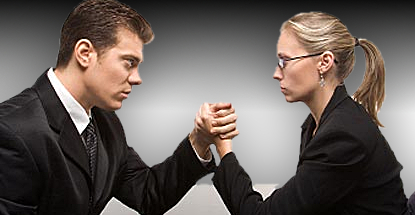 A new study claims women make better gambling choices than men when each is placed under stressful conditions.

The study, which was conducted at the University of Ohio by ecological psychologist Stephanie Preston, involved over 100 men and women who were told they’d have to give a public presentation on their own bodies following 20 minutes of a simulated gambling game. Given people’s inherent body hang-ups, the researchers wanted to see if knowledge of the impending shame-fest would affect choices made during gambling.

Preston told the Australian Financial Review that she hadn’t expected to see a clear distinction between genders but that was the dominant thread that emerged from the study. As the clock moved closer to the scheduled presentation time, the women in the study made better gambling decisions while men’s decision-making grew steadily worse.

Preston emphasized that the men weren’t necessarily more stressed than the women, but men tended to make more high-risk high-reward decisions as time grew short, betting more on the slim chance of a payoff, while women chose less risky options with a greater chance of a payday. The problem with the men’s strategy, according to Preston, is that they run a far greater risk of losing everything in the pursuit of one giant score.

Both genders had difficulty grasping the rules of the game at the start, which Presotn said was a direct reflection of the stress produced by the looming presentation. Preston said the study demonstrated that people make dumb decisions when it comes to managing their finances because “they’re not taking the information in that is going to help them make advantageous decisions.”

Of 103 TV adverts studied, only 2.8% were promoting basic match-winner offers, well behind promos for first-goal-scorer (27.7%), scoreline (30.1%) and scorecaster (33%) wagers. The Stirling study associated these latter categories with “high expected losses” for punters, at least, when compared to match-winner bets.

Poker pro Philip Newall, author of The Intelligent Poker Player, is a Behavioral Science PhD student at the Stirling Management School. Newall said punters find in-play wagers “much harder to get right” than simple match-winner wagers since there are “so many more possibilities to estimate.” Newall also accused these wagers of being “priced much less fairly to the public.”

In an echo of the University of Ohio study, Newall notes that bettors might be drawn to in-play wagers due to “a preference for bets with high potential payoffs,” with which most match-winner bets can’t compete. In the bookies’ defense, they are simply responding to the modern world’s increasingly short attention spans and an insatiable demand for variety. Hate the game, not the playa.