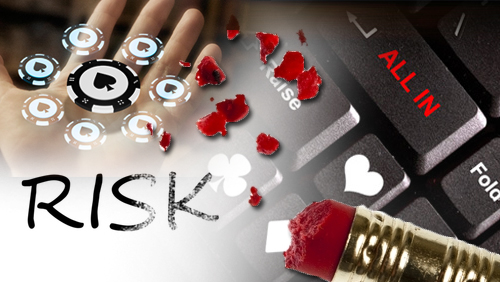 Everybody knows that starting a business is not an easy task. The risk of failure is huge. Starting an online poker site business is no different.

Every now and then I hear a story. Or I get approached. Someone had a brilliant idea! Let’s start an online poker room!

Over the last year I have spent my time working on the fringes of the poker and gambling industries. Working for groups nobody has heard of. Groups that are planning a sneak attack into the market. Respected groups of legitimate venture capitalists and planners. Groups that pay well.

I have been making a living literally de-risking and planning for them (scary thought right?).

I want to share some of my experiences here.

As my readers know, I like to jump around sections. In the end it all divides out.

Thinking about a poker startup? Stop for a moment. Take a deep breath and simmer down. You are probably going to fail. Be ready to die.

This quote is from this a Forbes article by Neil Patel. There is another link in that article to a Fortune Magazine piece which lists the top reason startups fail. And that top reason is ‘they make a product nobody wants.’

In relation to poker, nobody should show up with no true unique selling proposition (usp). The ‘build it and it they will come’ mentality is pretty much dead. This isn’t a field of dreams. “Just because” you can turn on an online poker room and incur costs doesn’t mean much to anyone trying to build an acumen in online gaming. Or a profit.

Some small rooms have managed in recent years to hack it and become liquid, such as Adjarabet (Singular/Microgaming). But the trend is not in the favor of the newcomer that shows up. Adjarabet were successful for hammering a niche market (Georgia in Europe).

To put in contrast what you are competing with, Amaya, the public company that owns PokerStars, posted up their year-end numbers a few months back. They equate marketing spends in the 100s of millions of USD. It is not easy to compete with that.

So ask yourself, why are you doing this?

There are three types of online poker rooms for anyone starting out:

A ‘Me Too’ room is a room that is started by someone that said ‘me too, I want one.’ In the current landscape this is almost certainly a losing proposition. Tila Tequila poker didn’t last did it?<

An example of taking over a brand would be for someone to buy an existing poker brand. ‘Stars did this with Full Tilt Poker. This isn’t some new trick. It is not proven too work recently either.

Not many of these exist but they do pop up. An example is a bitcoin poker room.

Which room are you?

For this type of project, the amount of risks will number in the hundreds as scope expands. For some reason, folks like to ignore the risks. This is how you lose all your money. Go to jail. Get fined.

Here is a tiny sampling of what a basic risk register would look like. Like I said, this should number in the dozens or you are not doing it right.

Where are your risks?

To all wishing to enter this space, beware. It is fraught with predators.

I love entrepreneurs. Who doesn’t? I love the energy that passionate founders bring to the room.

BUT sometimes this energy can easily blind the founder to predators. This hurry, this fervor to see their vision realized. They miss out some of the predatory folks milling around. Couple that with being an industry noob and suddenly the cost of business has gone up to accommodate early mistakes with the wrong people.

Pro Tip: Hire consultants for a few month that are reputable in the early days. A penny saved is a penny earned and this practice will save you money.

Some of the pitfalls I have seen are:

These are just a handful of the easy ones. Shady characters abounding here! (I enjoy cleaning this bullshit out). I hate ‘scammers’.

Be cognizant that the water is more red than blue.

Nobody deserves to get taken advantage of.

Who ‘scammed’ you so far?

If anyone is living in 2003 still, living off the anecdotes, well, it is time to stop.

It is 2015. Yes, 2015. If you don’t know what ‘it is 2015’ means, go read this article on ‘traffic and conversion.’ If as a reader, you feel uncomfortable with this, you are probably living in the past when it comes to online business.

If anyone tries to sell you on facts from back in those days, it is most certainly bad advice.

I led one of the biggest affiliate companies in the gaming space for a decent chunk of time. I was the CEO at 28 years old (flex muscles). The amount of miss-conceptions about affiliates drives me crazy sometimes.

To say ‘I have affiliates’ is not the answer to going liquid. It is a crucial element yes, but I don’t think people understand how tricky this entire process can actually be. Payments, tracking, fraud, support, promotions, etc. You name it, the costs pile up. The operations are not simple.

A huge problem I have is that most affiliate companies are incessantly trying to satiate the wills of the poker rooms whom are constantly re-working the deals. The affiliates have very little leverage unless they are top tier.

Pro Tip: This is why having strong negotiators is better than traffic in many instances. With an established brand. In a ‘declining’ market.

If you show up with a new poker room looking for affiliates here are a handful of basic elements I would ask them before starting out. This list is not all inclusive or anything, it is more about kicking off the discussion.  Warning, affiliates can be rather slippery, so your mileage may vary.

The affiliate business is often accused of being shady. That irks me. Look at flightcenter.com. Or any other travel site. They are all affiliates.

Yes, A few bad apples can ruin the bunch. And yes, I can name lots of historic bad apples unfortunately. But it isn’t supposed to be a shady business. Especially not in 2015.

If you are going to start out in poker or gaming and don’t know what an affiliate even is, than turn around and leave.

This is a can of worms which has recently been opened wide by the affiliate team over at PokerStars. They lowered the amount of life time earnings for affiliates. This has all the arm chair poker affiliates saying that now is the time to come and disrupt with old school rake back deals.

I wouldn’t be surprised to see some of these come popping up again. I am currently in the arm chair but looking to go for a stroll soon.

There are pockets of the old days existing as I just said. In emerging markets. Reports out of China and South East Asia are that 2005 is coming back. I have seen several new Asian facing software’s in the last month, so maybe it is changing. The B2C discussion has begun.

Maybe it is possible to disrupt and bring in a poker room that can gain some global traction. I was railing the #disrupt conferences recently and it made me feel some inspiration.

So I took that inspiration and I asked a bunch of industry pundits a few questions. Namely: “Do you think it is a good idea to open a new poker site right now?

Oddly, none of them wanted to officially answer on the record for some reason (sorry for anticlimax).

Off the record, my findings were interesting especially on one aspect, and that is the split on geographic lines.

All my nameless friends over in North America and Europe all said “No, heck no.”

Then I asked some friends in Asia and LATAM. They all said ‘Yes, but be very, very careful.”

Nothing is impossible in this amazing world. 50 Cent, the entertainer, found a way to re-purpose and sell water.  Anything is possible. Maybe some global disruption is possible in poker.

In this last year on my consulting journey, I have heard some pretty shocking things. Things from people that should know better.

I have seen and demolished fraudsters. Have saved people millions of dollars. Have earned people trust and respect. It has been stressful, fun and fucked up.

Look at all the poker rooms falling over, or posting record lows, while ironically, the global gaming industry grows.

If you just read through this whole article and still are adamant about starting a journey down the poker path, please think twice.