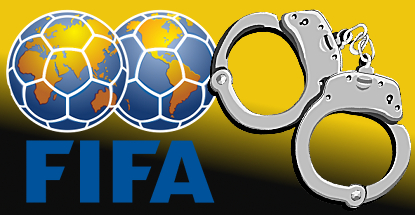 The football world was shaken up early Wednesday morning on news of the arrest of seven top FIFA officials in Zurich on corruption charges.

US authorities filed indictments of racketeering, wire fraud and money laundering conspiracy against 14 individuals – including FIFA VP Jeffrey Webb, who is also president of North American and Latin American football governing body CONCACAF – following a multi-year investigation. The arrested individuals are being held in a Swiss luxury hotel (natch) while extradition proceedings play themselves out.

Newly sworn US Attorney General Loretta Lynch said the corruption was “rampant, systemic and deep-rooted both abroad and here in the United States.” The US got involved because “these crimes were agreed and prepared in the US and payments were carried out via US banks.”

Lynch said “at least two generations of soccer officials” had “abused their positions of trust to acquire millions of dollars in bribes and kickbacks.” Over a dozen different schemes stemming from marketing deals in the US, Brazil and Latin America have been uncovered dating back to the 1990s, with the total amount of illicit funds topping $100m.

Specifically, the accused “engaged in bribery to decide who would televise games, where the games would be held and who would run the organization overseeing organized soccer worldwide.” US officials said they were continuing their look into “individual and entities in a variety of countries.”

Within hours of the arrests, Swiss federal authorities launched their own raid on FIFA offices looking for evidence of “criminal mismanagement and money laundering” related to the controversial awarding of the 2018 and 2022 World Cup tournaments to Russia and Qatar, respectively. While neither of those winning bids is likely to be rescinded, rumors of FIFA delegates selling their votes to the highest bidder have long plagued the decision making process.

FIFA conducted its own internal investigation of the bidding process, ultimately concluding that no evidence of corruption had been found. But former US Attorney Michael Garcia, who conducted the investigation, resigned in protest when FIFA refused to publicly release his entire 430-page report.

Russia’s foreign ministry hit back at the indictments, calling them “another case of illegal extraterritorial use of US law.” A statement on the ministry’s website called on Washington to “stop attempts to make justice far beyond its borders using its legal norms and to follow the generally accepted international legal procedures.”

Amazingly, FIFA president Sepp Blatter – whose name is almost synonymous with corruption in certain circles – has yet to be targeted by either probe. Blatter is standing for reelection to a fifth term as FIFA president in a vote that FIFA insists will go ahead as planned in Zurich this Friday. A FIFA official claimed Blatter was “not involved at all” in either probe and, while the president was “relaxed,” he was not “dancing in his office.”

This video clip may be a year old, but its relevance is timeless.