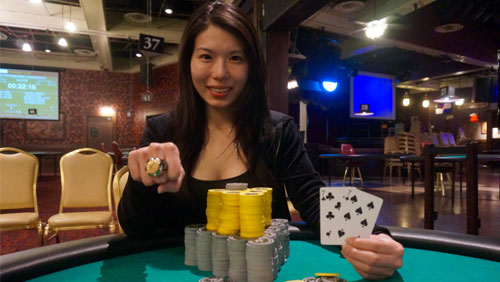 It took 11-years for the World Series of Poker Circuit (WSOPC) to hand out a Main Event first prize to a female, and when it did, it went to a someone rarely plays tournament poker.

Taiwanese born, Michelle Chin, told WSOP reporters that she was playing in only her 10th ever tournament when she captured the first prize of $88,126 in Event #10: $1,675 buy-in Main Event at the Horseshoe Casino in Council Bluffs, Iowa.

Chin, who has been a US citizen for the past 12-years, overcome 235 entrants, and a very tough final table, to earn the win, and a seat in the National Championships taking place in North Carolina July 29-31. Horseshoe Casino Champion Duane Gerleman will also be joining her after five cashes, three final tables, and one victory.

“It means a lot to me [to be the Circuit’s first female Main Event champion],” she told WSOP reporters. “There aren’t too many women in the poker community. We like to see more and more women play because it is a fun game. No matter what sex you are you should be able to enjoy it. It means a lot to me. I hope I encourage a lot of other girls to come out and play.”

It was an exceptionally tough final table. Jesse Wilke was looking to win his second WSOPC Main Event title of the season, after his early victory in Lake Tahoe, and Michael Sanders was also a former gold ring winner.

In the end the battle for the title would come down to Chin and Michael Lang. Chin had only ever cashed in one live tournament; a victory in the WSOPC Ladies Event in Choctaw. Lang had an uncanny habit of coming second after being the bridesmaid on four other occasions.

The event went true to Hendon Mob stats. Chin maintained her 100% record with the victory, and Lang picked up his fifth second place finish of his career.