Home / Poker / Confessions of a Poker Writer: My Ode to the Devilfish 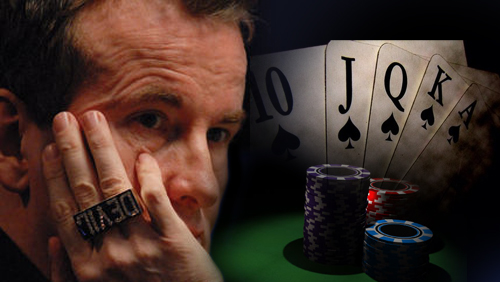 In this week’s confessions series Lee Davy takes the time to ponder his fleeting experiences with one of poker’s all time greats: Dave ‘Devilfish’ Ulliott.

It’s July 2010, PR Newswire have sent a press release to all and sundry.

I had been in the industry for a matter of months. The Editor of Poker Pro magazine asks me to interview him. Talk about a baptism of fire. I was so excited. Like many poker enthusiasts, from the UK, I had grown up watching the Devilfish owning Late Night Poker.

Now I could interview him.

I booked my tickets for Hull.

Then I cancelled them again.

The interview would be done via telephone.

This was the moment that I realized that interviewing poker players would be done on their terms. In general, there is no real reason for a poker player to talk to you. There is no financial remuneration. Personal branding seems to be stuck rigidly with Jason Somerville.

But the Fish had a book to sell. It was time to pull on those famous knuckle-dusters and do some work. I was in Brighton. He was in Hull. It was my wedding anniversary. My wife vanished in a huff. I spent the evening talking to the Fish. Well, that’s not true. I spent the evening listening to him. Well, that’s not true either. I couldn’t understand a word that spilled from his lips.

You have to be British to ‘get’ the Fish. The rest of the world sees a male chauvinistic pig with a vocabulary full of fucks and cunts. That was normal to me. I was brought up in the working class north. He was of my ilk. I might not have understood him; but I understood him.

“Life is a blast. It doesn’t last. Live it long and live if fast.”

Those were the first words I wrote down on my pad that night.

Quite poignant don’t you think?

The rules of poker interviewing etiquette were unknown to me at the time. He answered every question I threw at him. I finished the interview, smiled, wrote it up, sent it to my Editor, and went looking for my wife.

‘Are you sure he is ok with this?” Asked my Editor.

A few months later I felt proud as punch when I saw the Fish gracing the front cover of the magazine. It was my first front cover. I still have it. I was going to frame it and stick it on the wall in my office. I never got around to owning an office. It’s in a blue filing cabinet in the spare room.

It was the Fish.

“Like it! Like it! Who the fuck gave you permission to publish it?” He screamed down the phone.

What was this man on about?

I had just learned a lesson. I was hoping it wouldn’t be the hard way. The next time I saw him was in The Vic. I was in there with a few of my mates when he strolled in. He looked like Danny Zuko on crack. He had shades on. He was inside. That always bugged me. But he got a pass.

My mate was all over him.

Despite spending time with him, on many occasions, I still to this day believe he hasn’t got the foggiest idea who I am. I’m glad in a way. Otherwise the words DEVIL and FISH might have been branded into my forehead after that first interview.

The next time I saw him was in the airport at San Remo. It was hilarious. All these families were waiting for their luggage, and the Fish was lolling around. He looked like Keith Richards. Everyone was staring at him. He looked like a rock star, and people knew it – they just couldn’t figure out which one.

The Fish was wearing more leather than DFS.

When his case finally arrived it was this tiny little Italian number. You could have fitted it into his back pocket.

“What have you got in that?” I asked.

Like I said, I could never understand a word.

That was an education.

All of the jokes came out.

There have been a lot of stories written about the Devilfish since news broke of his battle against cancer. They all carry a certain theme of him being this man who spoke his mind.

That’s not my experience.

He must have thought, “How long do I have with this one?”

All men who have children at an older age do.

He would have hoped for more time.

Give him a little more time.

Doyle Brunson recently questioned whether Devilfish should be allowed into the Poker Hall of Fame. There were a lot of replies suggesting that it’s a travesty that he wasn’t already in it.

For every success there is someone who was pivotal to it that the world doesn’t get to see. I recently read Gandhi’s autobiography and he would have been nothing without his wife. Martin Luther King was held together by his other half. Stephen Hawking might not be alive today if it wasn’t for his first love.

It’s a stretch to say that poker would not be what it was today without the Devilfish. But his role in the growth of our game, in the early television years, is vastly under-estimated. His crass and vulgarity make sure that the honors, that should be bestowed upon him, haven’t been.

There is a certain sacrifice.

I’m sure he would like his youngest to grow up and watch videos of Daddy speaking all refined and nice. That wasn’t his role. His role was to play the bad guy, and he did it better than anyone. Nobody gives out awards to bad guys.

Could you imagine the speech?

I hate this cancer thing, this dying thing – this ending of things. As we age, it becomes more and more present in our lives. It’s sad, but you start to get anaesthetized to it, which is sad in its own way.

I hope the Fish can pull through.

“All my life I have had rubbish hands and I have managed to turn them around. It’s what I am good at, and this is no different.”

Playing the role right until the very end.