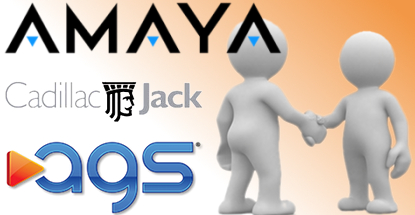 Canada’s Amaya Gaming has taken another major step toward divesting itself of its B2B assets via the sale of land-based gaming machine division Cadillac Jack.

On Monday, the Montreal-based Amaya announced it had struck a deal to sell Cadillac Jack’s indirect parent company Amaya Americas Corporation to American Gaming Systems (AGS), an affiliate of funds managed by Apollo Global Management. Apollo is one of the two hedge funds that control struggling casino operator Caesars Entertainment.

AGS, which designs and manufactures gaming products for US tribal casinos, has agreed to pay Amaya C$461m in cash plus a $15m payment-in-kind note bearing 5% annual interest that matures eight years from the deal’s closing date. The parties expect the deal to close later this year.

In January, Amaya announced its plans to shed its B2B assets in order to focus on its Rational Group B2C operations – including online gambling sites PokerStars and Full Tilt – that Amaya acquired last June for $4.9b. Amaya had already announced its intention to flog Cadillac Jack several months prior to the January announcement. The Cadillac Jack sale follows hot on the heels of last week’s announcement that Amaya would spin off its Diamond Game Enterprises lottery unit via an initial public offering.

On Monday, Amaya CEO David Baazov said he was proud that Cadillac Jack had “grown its business significantly in new geographies and new markets” under Amaya’s leadership. Cadillac Jack currently boasts over 13k installed units across the US and Mexico. Baazov added that the combination of Cadillac Jack and AGS “presents a strong opportunity to expedite the company’s growth strategy” while “crystalizing on the strong value created in the business to benefit Amaya’s shareholders.”

AGS CEO David Lopez said the deal “further demonstrates that we are positioned to take the next step in establishing ourselves as a major player in the gaming industry.”

Amaya acquired Cadillac Jack in 2012 for $167m and Amaya intends to use the sale’s proceeds primarily for deleveraging, including repayment of Cadillac Jack’s debt. Amaya shares were up 7% on the Toronto Stock Exchange following the news. Amaya is set to release its Q4 and FY 2014 results on Tuesday.