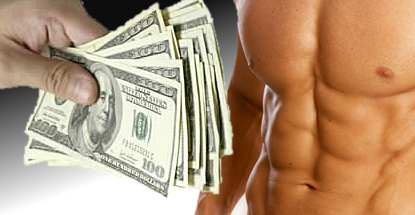 Online gambling firms that use hot girls in their marketing campaigns to attract male punters would likely have better luck using pictures of hot men.

Chan then asked the test subjects how they would approach certain financial transactions, such as investing in high-risk financial stocks or playing gambling games with varying degrees of risk but equivalent outcomes (a guaranteed win of $50, or a 50% chance between winning $100 or zero).

Chan clarified that none of the guys in the subject group displayed any signs of sexual attraction to the models in the advertising. But Chan said that when average looking men view other men with chiseled jaws and six-pack abs, they feel inferior and thus look to overcompensate by taking risky moves to boost the size of their wallets.

Chan told the Daily Beast that earlier research had demonstrated that “women look for men who are not only physically attractive but also men who have financial resources … if men lack one, i.e. physical attractiveness, they would be motivated to compensate by accruing the other, i.e. financial resources or money.”

Chan found more mixed results with the female test subjects, some of whom took greater financial risks while others didn’t. Chan suggested this was because men were far less likely to give a damn about a woman’s bank balance, provided she had an attractive face and curves in all the right places.

Chan said his research demonstrated that while most men say they’re not bothered or intimidated by better looking men, “they do impact us, whether we are conscious of it or not.”