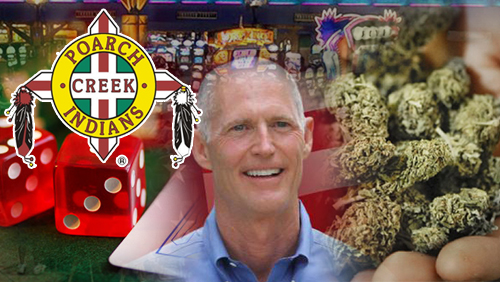 The Poarch Creek Indians have told Florida Governor Rick Scott that if the state refuses to allow the tribe to expand their casinos, they will have no choice but to start growing and distributing marijuana on the land designated for their gambling expansion.

If the state rejects the deal, the tribe is within its rights to use the land to grow marijuana, as Department of Justice stated in December that tribes can grow and distribute marijuana on their sovereign land — even if the state in which that land is situated has not legalized marijuana.

“We are entitled to negotiate a compact with the state,” said Poarch Tribal Council Chairwoman Stephanie Bryan. “We have 642 tribal members living throughout the state of Florida. We are asking Gov. Scott to acknowledge we are a federally recognized tribe.”

A warehouse is already under construction on an acre of land owned by the Poarch Creek Indians but a spokesman from the governor’s office said that the governor will not negotiate with the tribe.

The Poarch Band of Creek Indians operates the Wind Creek Casino in Atmore, just a few miles north of the Nokomis property and Wind Creek casinos in Montgomery and Wetumpka, AL.

Currently, only the Seminole tribe has a gambling compact with the State of Florida.  A portion of a 2009 agreement giving the Seminole Tribe exclusive rights to conduct card games at seven of its facilities ends in July unless lawmakers and Scott renew the deal.