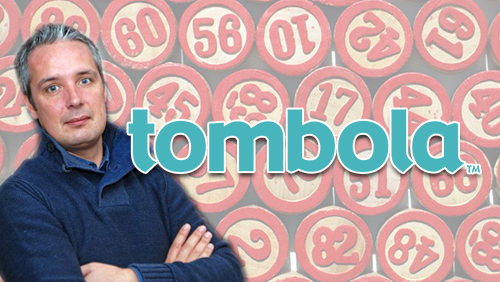 Former University of Newcastle student Murray Chisholm, 41, was appointed managing director of tombola international at the end of last year.

Tombola has its group headquarters in Wylam Wharf, Sunderland, but Murray will be based in the company’s Gibraltar office.

“It’s long been an ambition of mine to work with tombola, so I’m thrilled to have joined the company,” he said.

Manchester-born Murray moved to Newcastle to study and earned extra money by working as a croupier at a Tyneside casino.

In 2003, Murray spotted a job advert for gaming company Victor Chandler (now BetVictor) in Gibraltar in 1999. “I was recruited to manage, develop and expand the casino, poker and gaming customer support teams”.

When children came along, Murray moved back to the UK, having found a job helping to set-up a poker software company (Tribeca Tables Poker). Which was sold for $140m in 2007.

“Later that year, I joined Gala Coral and was there for six and a half years, added Murray.” He began his career at the gaming giant as Head of Bingo and Casino, commuting from his home in Saltburn to Woking where the company was based.

In 2010 he was appointed Business Change Director for the Gala Coral Group, relocating the company – and his family – back to Gibraltar the following year. He was then given the role of Business Development Director of Gala Interactive, a role he left in late 2013 when he moved to the Rank Group as Digital Development Director, still based in Gibraltar.

“The job I really wanted was the role of MD at tombola and when it became available I applied straight away, and successfully negotiated a tough interview process. I felt it was my natural destiny, I had all the right experience at the right strategic level at some great companies, and I had a deep knowledge of the bingo market and its customers, as well as tombola”.

“I was delighted to get the job. Tombola has always stood out from competitors as a genuine bingo brand. It’s a different business model with a genuine ethical approach to customers. We put our players and our responsibilities to them at the core of everything we do’.

“There is a strong culture at tombola, a principled model of working which was born here in Sunderland, but which is key to our success and has been adopted in our offices in Spain, Italy and Gibraltar.

“The company is in a very strong position – we develop our own online products, unlike other companies, and with the introduction of our academy (which recruits apprentices and graduates), we are developing talent all the time.

“We’re obviously looking at further expansion on mainland Europe and beyond, but only where there are regulated markets. We’d keep the same model, culture and principles that have served us so well.”

Tombola CEO Phil Cronin said he was delighted to have Murray on board: “He has vast experience of the gaming industry, is passionate about the sector and really understands the way we work here. I’m looking forward to working with him and to him helping tombola expand further.”

Tombola was last year confirmed as the largest bingo operator in Spain and Italy, only two years after moving into the European market. The group employs more than 300 people, the vast majority of them in Sunderland.