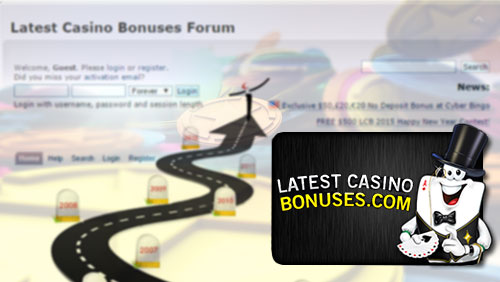 Since its conception in 2006, LatestCasinoBonuses (LCB) has progressed into a multi-functioning site, which serves as the initial go-to hub for gamers across the world, seeking information relating to the gambling community. The unique thing about LCB is that they strive to cover virtually all aspects of gambling, in order to meet the interests of many, throughout the varying facets of the industry.

Within the LCB library, the options are endless. Visitors to the site can gain access to the latest gambling-related news, hundreds of online casino reviews as well as an entire directory dedicated to land-based casino reviews, thousands of free games, allowing members to try out literally thousands of games without actually spending a penny, and much more.

From the beginning, LCB has been both setting and breaking records, proving its proficiency within the online gaming sector. In fact, they broke their own record for ‘Most Online Ever’ at the forum, with 21,727 visitors in just one day, setting high standards among its competitors. However, this was just the beginning for the site.

As the years have gone by, they have reached new heights. Just as of early 2015, LCB announced a new total of free games offered to visitors, topping out at just over 3,000 games available, ranging from video & classic slots, parlor games, video poker and table games, powered by a variety of top-rated software providers.

While the New Year has only just begun, LCB is moving full speed ahead, setting the tone that hitting the 3,000 mark in free games is just one of the major feats they plan to accomplish in the following months. Just weeks after making this announcement, they have broken the news that they have reached yet another milestone in their journey of success regarding the total amount of members registered.

LatestCasinoBonuses.com is now celebrating its new sum of 70,000 current forum members and congratulations are certainly in order. The lucky member who helped them achieve this major milestone hails from the United States, and became a member on January 18, 2015 at 11:28:32 PM CET / 5:28:32 PM EST.

With several awards under their belt, including two Best Affiliate – Casino and Best Overall Affiliate for 2013 and 2014, LCB is clearly at the top of their game. Head to http://www.latestcasinobonuses.com/ for access to a complete online casino library, consisting of over 50,000 pages, and to become part of the magic.