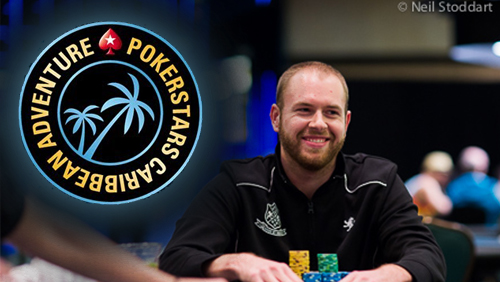 Kevin Schulz has defeated Diego Ventura, in heads-up action, to take the first prize of $1,491,580 in the $10,000 PokerStars Caribbean Adventure Main Event in the Bahamas.

816 entrants entered, 119 made the money, but when all was said and done it was a battle between two online grinders, from two very different American continents, who would take the lion share of the cash in the final of the $10,000 PokerStars Caribbean Adventure (PCA) Main Event.

Last year, the final table was a 16-hour slugfest – this year it was a six-hour knockout punch. When the final bell rang it was the American Kevin Schulz with his hand held high, but his runner-up Diego Ventura had plenty of reasons to smile.

“I’m pretty happy. I had some pretty good reads on everybody, but you never know what’s going to happen. I love skydiving but this is maybe one of the most intense things I’ve done in my life! I don’t have any plans in mind for the money right now … I’ll take some time to think about it all – and try to make sure I don’t blow it because that seems to happen a lot!” Schulz told PokerStars after his win.

Predictably, it was Schulz’s biggest win of his career. The 26-year old was amongst a score of online grinders who fled to Mexico, in the wake of Black Friday, and his PCA victory tops his fourth place finish in a World Series of Poker$5k No-Limit Hold’em (NLHE) event, where he earned $267,792 back in 2012.

When the final day started five out of the eight players were American, two were from South America, and then you had the bog standard presence of a German. Chance Kornuth had the chip lead, and he was one of the most experienced players at the final table – with two previous scores in excess of half a million bucks – but he would finish in third for a not too shabby looking $641,140.

The final table also housed two quality American players in Pratyush Buddiga and Dylan Linde. Buddiga is a sensation at the moment. He took home over $1.3m in High Roller winnings just prior to the Christmas break, and I predicted he would be one of the stars of 2015. He hasn’t let me down. Although Buddiga will be disappointed with his seventh place finish such are his impeccable high standards.

Linde has been an absolute revelation since joining Phil Galfond and the gang as a coach at RunItOnce. 2014 was his best year ever, with over $200,000 in live tournament earnings, and his eighth place finish in this one, for $140,900, is his single biggest cash to date.

With Linde and Buddiga failing to make an impression, the heads-up clash would come down to a battle between Schulz and the young Peruvian Diego Ventura. The super cool young kid is the number one ranked online player in Peru, with over $1.2m in earnings, and his $907,080 cash is the highest in Peruvian poker history. Not bad for a $700 investment!

Ventura’s performance was exceptional, and yet it was the performance of a very different South American, that made all the news. Brazilian footballing legend Ronaldo finishing in 26th place to plaster his mug on new stands all over the world – another great advert for the game of poker.

The next time PokerStars hit the live scene in a big way will be the European Poker Tour (EPT) in Deauville, Northern France, Jan 28 – Feb 7.