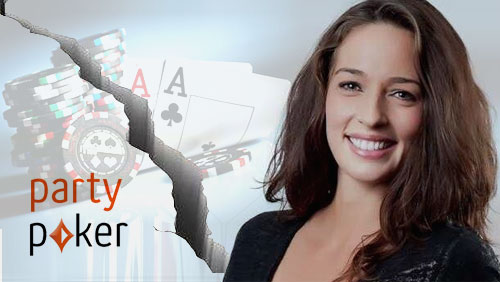 Kara Scott is the latest professional poker player to part ways with a sponsor after her five-year affiliation with partypoker ends with 2014 drawing to a close.

Kara Scott is back on the market.

A sentence printed to excite the minds of poker organizations and not foolhardy men who think they’ve got a chance.

Nope, Kara Scott remains happily married but she has signed on the dotted line of a set of divorce papers that ends a five-year relationship with partypoker. There was a time when this news would have made waves; today it barely ripples and it goes to show the recent trend of burning professional sponsorship contracts can tinge the fingers of anyone.

In a recent interview with the PR mastermind, Warren Lush, I asked him which sponsored players had been worth their weight in gold during his time in the biz?

“I think Kara Scott is a fantastic ambassador for poker. She is an excellent TV presenter and great with customers. We use her as a face on the mobile app and we have enjoyed an excellent relationship for years now,” Lush told me.

She ticks every single box; proving the decision to allow people to leave – or not trying harder to get them to stay – says more of what online poker rooms are beginning to understand about the value a sponsored pro has to the company doing the hiring, than the actual ability of the person hired.

The announcement was made on Kara Scott’s Cardrunners blog.

“PartyPoker has gone through many changes and unfortunately as their focus shifted, there were fewer and fewer TV projects. As those shows disappeared, so did one of my favorite parts of the job and now my association with Party is ending. However, I’m not going anywhere. I still love playing poker and have made a lot of great friends in the industry.”

To be fair to bwin.party they did say that moving forward their “rest of the world focus” would be on casino products, and a concentrated effort on poker would only be made in the U.S. Scott is a globally recognized face, and spends more time on airplanes than Ted Striker, but her European base, and work within the European tour stops, doesn’t push her nicely into a New Jersey niche.

Scott follows “Mad” Marvin Rettenmaier out of the door marked “exit” and it will be interesting to see what happens to both Jamie Kerstetter and Scott Baumstein once their contracts come up for renewal. Ken Daneyko did buck the trend by joining the team at partypoker, but he is a former sports star, thus fitting the model of sponsored pro that seems to more appropriate in modern times.

With ties to partypoker now snipped, Scott can spend more time concentrating on her famil, and she will continue to work with the ESPN and World Series of Poker (WSOP) when the summer comes rolling into her life. During her time with partypoker, Scott played a pivotal role in turning TV productions of The Premier League and the Big Game into some of the greatest poker shows ever televised.