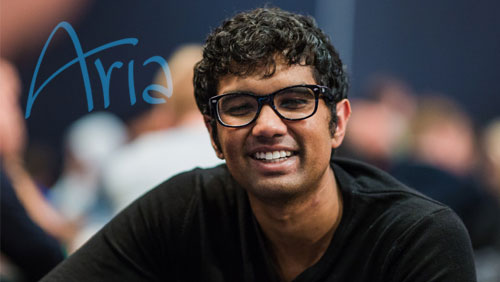 Pratyush Buddiga continues his impressive streak of results with victory in the $25,000 High Roller at the Aria Resort in Las Vegas, after beating World Series of Poker bracelet winner, Larry Phillips, in heads-up action.

The Spelling Bee wizard defeated the former World Series of Poker (WSOP) bracelet winner, Larry Phillips, in heads-up action, to top a field of 59 entrants, and take the lion share of the $1,430,750 prize pool.

The final table, as you would expect, was brimming with talent. Multiple WSOP bracelet holder, Brian Rast, made it the fourth consecutive year that he had exceeded seven figures in live tournament earnings, after his third place finish. Rast has now taken over $600k from Aria High Roller events in 2014 with two third and two fourth place finishes.

Buddiga defeated Phillips in a heads-up encounter that last close to seven hours. The final hand seeing Buddiga’s pocket nines outlasting the KQo of Wright on a board of A43A5. Most of Wright’s $343,380 purse was handed to the Yei Children’s Village in South Sudan.