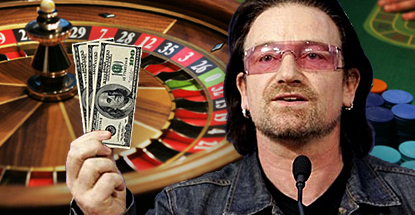 U2 frontman, sunglass aficionado and occasional world-saver Bono turns out to be a notoriously cheap gambler. In a new profile for UK music magazine Mojo, Bono and his bandmates took their Mojo scribe to a casino in Monte Carlo. There, Bono revealed that he routinely offers to fund his mates’ gambling habits when they all go out together, provided everyone caps their individual wagering at $125.

Bono said he prefers blackjack or roulette and that he always keeps his bets on the miniscule side. He also revealed that his micro-stakes and $125 limit policies applied to anyone willing to take him up on his offer, including Bill Gates, Microsoft founder and fellow member of the One-Percent Club. Bono said Gates was a bit underwhelmed by his host’s generosity. “I gave [Gates] an envelope and he opens it and there’s €100. It was like, ‘What do I do with this?’”

Bono is to be applauded for his responsible approach to gambling, including setting limits and not wagering more than he can afford to lose. But for the record, Bono’s estimated net worth is around $600m, so he could bankroll a casino night for all of Ireland (but not Ulster) and still have cab fare home. And while it’s nice to know that the devout Catholics in U2 don’t think God minds if his flock have a flutter or two, we bet Bono’s forever pissed that roulette wheels don’t go up to 40.