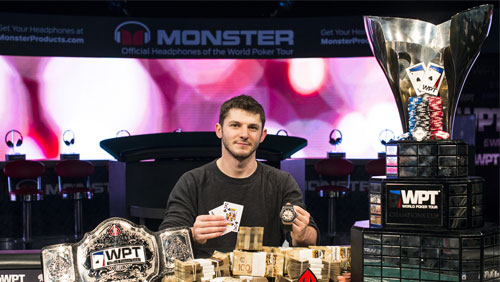 Jonathan Jaffe has a pretty good record when he makes the money in World Poker Tour Main Events. Number of tournaments = 2. Total cash won = over a million dollars. Titles = 1.

Jaffe erased his painful defeat to Jonathan Little, in the 2008 World Poker Tour (WPT) Main Event in Foxwoods, to overcome the stern challenge of the relatively unknown Ratharam Sivagnanam, in heads-up action, to claim the title, and $429,106 in prize money, at the Playground Poker Club in Montreal.

It was a fantastic tournament for Jaffe, who took the chip lead at the end of Day 3 and carried forward until he was the only player left seated at the table. The final heads-up combatants started the final table of six with dominating chip positions. Jaffe had 124bb, Sivagnanam 114bb, whilst the rest of the field fell somewhere between 26-34bb.

And what an amazing group of players they were.

Guillaume Nolet might be an unfamiliar name to most, but the same cannot be said for the rest of the field. Mukul Pahuja is the current Season XII WPT Player of the Year. He earned that title in spectacular fashion after two runner-ups, a fourth, and an eighth. Unfortunately, the victory remains a byzantine puzzle that he just can’t seem to solve, after finishing third in this one.

Kevin MacPhee is a man on fire right now. He finished sixth in a World Series of Poker (WSOP) $5k event in the summer, and was close to becoming only the second player to win two European Poker Tour (EPT) Main Event titles, when he finished runner-up in London recently. MacPhee would pick up another six figure score with a fourth place finish in this one.

Then you had the local lad Samuel Chartier. He is balancing his time between playing poker, and running his own vodka company, but seems to be doing a grand job, with a final table appearance here in Montreal. Chartier moving closer to the $2m live tournament cashes mark with a fifth place victory in this one.

732 players created a total prize pool of $2.3m and the order of the knockouts went a little something like this.

Jaffe eliminated Nolet after Pahuja had doubled through him after just nine hands; Chartier moved all-in with pocket sevens and was eaten alive by the pocket queens of Sivagnanam; Jaffe opened the button holding AQcc, and then called off the MacPhee small blind shove holding KTo to end his hopes; and then he made it scalp number three when he found KK at the same time Pahuja was making a stand with AQs.

After the elimination of Pahuja, Jaffe carried a 16m v 5.9m into the heads up phase against the inexperienced Sivagnanam. It would be a heads-up contest that would last longer than the rest of the final table combined. The only all-in and call was the final hand of the night when the AKcc of Jaffe pipped the T8dd of Sivagnanam to the post to send his rail into a roar of rapture.

The next stop on the World Poker Tour will be the Five Diamond World Poker Classic at the Bellagio in Las Vegas, Nevada from December 15-20.