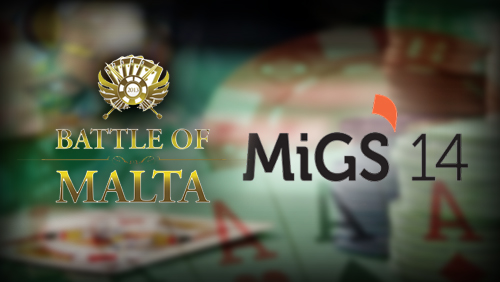 27 October 2014, St Julian’s, Malta (Press Release) The MIGS 14 organizers announced that they have joined forces with Battle of Malta and will partner in the coordination of another poker tournament that will be held on the 10th of November. The joint effort has been put together to both attract the major players from Europe’s most popular low buy-in tournament to stay in Malta for an extra day as well as entice further interest in attending the Malta iGaming Seminar.

Organisers of Battle of Malta and MIGS14 see this partnership as a perfect marriage in that it places both of Malta’s biggest iGaming events together in the same calendar week and thus their joint marketing effort will further boost business tourism and the iGaming industry in Malta.

Ivonne Montealegre, Tournament Director of Battle of Malta said, “Hosting of the MIGS tournament that is back to back with Battle of Malta 2014 is in line with our objective of making this weekend a long poker festival where both player and igaming community can come together. Poker tables are probably the best way to network and we hope to see everyone there.”

The buy-in for the No Limit Hold’em freezeout tournament will be € 30 per person plus a €5 registration fee. To add value to all participants, besides the winnings there will be other prizes that will be added. Andy Jones, Partner of MIGS and CEO of AliQuantum Gaming said, “We are delighted to bring to the MIGS delegates a new dimension of entertainment in that they may compete in an elite forum that will include the best poker players from around the world”

MIGS14 will be kicked-off on the following day by the Minister for Economy, Finance and Small Business Hon. Dr. Chris Cardona and is tipped to be a major success. For more information about the Poker Tournament and MIGS14 go to http://www.maltaigamingseminar.com