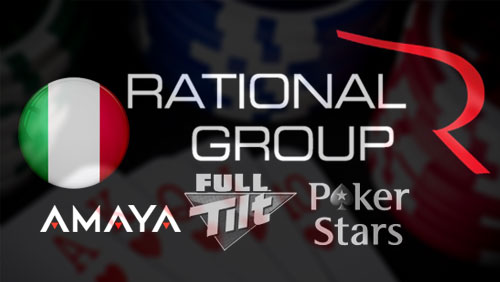 Amaya Gaming Limited have reversed the Rational Group’s decision to launch Full Tilt into the Italian regulated online gambling market, choosing instead to focus their attention on growing the presence of their PokerStars.it product.

Amaya Gaming Limited continue to flex their muscles after reversing the Rational Group’s decision to enter Full Tilt into the regulated online gambling industry in Italy.

According to PokerNews reporter, Giovanni Angioni, news emerged in the Italian rag Agimeg where it’s believed the primary reasons behind the reversal is the decline of the online gambling business in Italy.

It’s no secret that Amaya Gaming Limited have plans to roll out an expansive Full Tilt online gambling platform, that includes a sports book, and the Italian sports betting industry saw revenue nosedive from €168m in 2009, to €135m in 2013.

The primary reason behind the Italian’s struggling online gambling economy is the heavy taxation, with betting turnover tax set between 2% and 5%, and gross gaming revenue taxed at 20%.

The Rational Group filed an application with the Italian Regulator Amministrazione Autonoma dei Monopoli de Stado (AAMS) early in the summer. The splash page at FulltTilt.it still shows the ‘Coming Soon’ title, although it seems clear now that Amaya would prefer to focus their attention on the growth of PokerStars.it, rather than trying to feed on scraps with two separate online gambling outfits.

Not all online gambling enterprises think like Amaya; however, after Bet365 went ahead and opened in Italy despite the decline. Bet365 join the likes of William Hill, Betfair and Paddy Power in the Italian market.

Marco Trucco to Replace Barbara Beltrami as Head of PokerStars.it

Overseeing the focus on PokerStars.it will be their new chief, Marco Trucco, who replaces Barbara Beltrami after six years in the hot seat.

Trucco leaves his position as Gaming Director for the Gala Coral owned site Eurobet.it. He has previous experience working as the Country Manager of Everest and also has time served with CasinoItalia.it.

The decision to withdraw plans to enter Full Tilt into the Italian market means that PokerStars.it may well add casino games to it’s platform. Trucco’s experience in the online casino industry makes him a perfect candidate to oversee these changes should they come into affect.