Home / Poker / Confessions of a Poker Writer: The Man in the Suit and the Upside Down Glasses 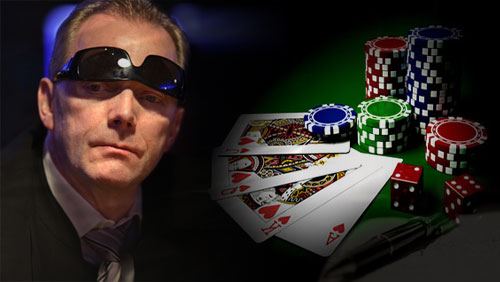 Lee Davy continues his confessions series with a look back at his first meeting with The Flying Dutchman Marcel Luske.

I was sad when I heard that PokerStars had parted ways with Marcel Luske.

Rather ironically, I met The Flying Dutchman flying on a Dutch airline. We were waiting for a flight to Amsterdam: Marcel, two Dutch reporters and me. The three of them were speaking in Dutch and I just sat on the sidelines. He was wearing a tracksuit and carrying one of those man-bags that European’s are brave enough to wear.

During the hour that we waited, I never uttered a word. This wasn’t because he was speaking Dutch. It wasn’t because I was nervous. I just didn’t feel I was allowed to speak to him. I hadn’t earned the right.

The day prior, I watched him being interviewed by Michelle Orpe. Tall, handsome and well dressed. He had the touch of gangster about him. More Gustavo Fring than Tony Montana. The type of person who shows you exactly what he wants you to see and you don’t want to see the stuff he doesn’t want you to see.

I walk behind him on the plane.

“Marcel, what are you doing on this flight? Don’t you have your own private jet?” I asked.

“Young man. Nobody has any money in this game,” replied Luske.

Prior to his date with Orpe, I had only seen Luske on TV. He was a star. Anyone who gets on TV is a star. Whilst I was joking about the private jet, I wasn’t joking about the money. This new kid on the block assumed if you traveled around the world playing poker, then you must be rolling in it.

Airfare, hotel accommodation, swanky restaurants, over-expensive alcohol, and buy-ins ranging from $5,000 to $100,000. Wasn’t everyone wiping their ass with fifty-pound notes?

Now I can look back and see that Luske had two identities. There was the image that you saw on TV. The well dressed, lady-killer, who had won more money playing poker than any Dutchman alive or dead. Then there was the man away from the limelight. The man who thought about balance, electricity bills, and what to get for Sunday Roast.

Luske comes from a period when poker players needed to work damn hard to get noticed. They had awareness. They knew they needed to do so much more than just turn up and play. They had to carve a niche out of the market. The suit, the tie, and the upside down shades were all part of the plan.

It worked for me.

I was the man sitting in my armchair eating cheese on toast, drinking a cup of tea, and watching the World Series of Poker on TV. I saw him, I wanted to be him.

He wasn’t sitting at home eating cheese on toast and drinking cups of tea. He was in a five-star hotel bathing in champagne and picking his nose with fifty pound notes. He was the type of guy who paid to eat his breakfast in his room, used the trouser press, and polished his shoes.

It was people like Luske that attracted me to the game in the first place.

“Never make someone a priority when all you are to them is an option.”

Luske tweeted that Maya Angelou quote on the 6th September. Days later, his face would vanish from the gallery that every poker player wishes to adorn.

We are only an option.

The characters of the game are being shunted aside, the new cast all look the same, and the sports stars are being paid handsomely to fill the void.

But Rafael Nadal is not a poker player.

Ronaldo is not a poker player.

You won’t even see them competing for real money. Heaven forbid that they tarnish their reputation by gambling.

Give me the man with the suit and upside down glasses any day.