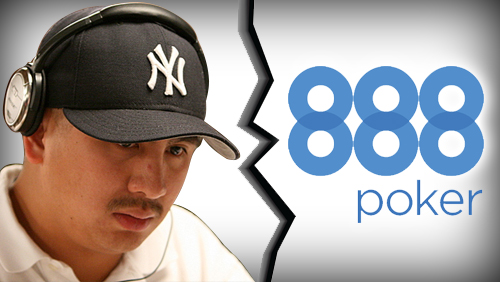 JC Tran parts ways with 888Poker close to 12 months after signing for them amid the halcyon days of the 2013 World Series of Poker Main Event where Tran finished in fifth place for over $2.1 million in prize money.

Would you replace JC Tran with Bruno Foster Politano?

Ok, so it’s a rhetorical question to underline the power of the World Series of Poker (WSOP) November Nine to the marketing departments of the online poker rooms, but that’s what’s happened, at 888Poker, after JC Tran extolled his parting of the ways with a tweet.

Want to announce that I am no longer a member of @888poker. Thank you for a fun journey ovr the past 12mos. GL to all of #team888

Tran was picked up by 888Poker as he prepared to enter the 2013 WSOP Main Event final table as the chip leader. He would ultimately go on to finish fifth for over $2.1 million but 888Poker would continue to get their money’s worth after Tran went on to secure five more major final table berths, including a victory at WPT Rolling Thunder in Lincoln.

The two-time WSOP bracelet holder, multiple World Poker Tour champion, PartyPoker Premier League winner, and member of the Global Poker Index Player of the Decade, is hands down one of greatest poker players of our time, but his marketing appeal seems to have lost sway.

The Brazilian Bruno Foster Politano, who enters the 2014 WSOP Main Event as the short stack, will replace the 37-year-old Vietnamese born family man. I expect that Politano would have also signed a one year deal.

It’s been a topsy-turvy time for online poker sponsorships.

On the 888, front Luis Suarez was in and out quicker than a fiddlers elbow, former Nov Niner Sam Holden left to focus on his philosophy studies, and the pairing of Sofia Lovgren and Xuan Liu came in as replacements.

The only other Nov Niner to be signed by an online poker room is Felix Stephensen. The 24-year-old Norwegian signed a deal to represent Betsafe back in mid-August.