Home / Poker / All in with Bertrand “ElkY” Grospellier 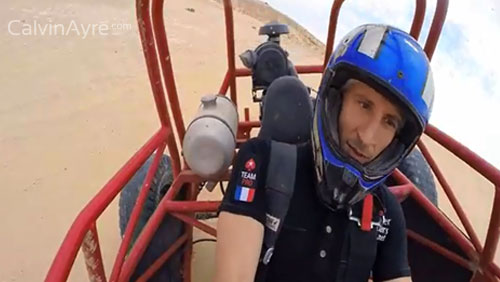 In this episode of All In, CalvinAyre.com takes us to ElkY’s day off from the poker table where he tries buggy driving on the desert for the first time.

Bertrand ‘ElkY’ Grospellier was already an online gaming star before he became a poker player. After moving to Korea in 2001, ElkY was a regular face at the World Cyber Games and in the Korean Pro Gaming league. His specialty was StarCraft, a game in which he is still one of the top ranking players. With poker, he found a way to turn this talent into huge cash prizes.

Today, we bring him and his girlfriend Jenny No to Sunbuggy Fun Rentals in Las Vegas, Nevada.

Watch the video and see how his girlfriend kicked his ass in a competition they’ve created called Who drives better?