Confessions of a Poker Writer: Alcohol and Writing

Lee Davy continues his confessions series by exploring the role that alcohol had on his journey to become a writer. 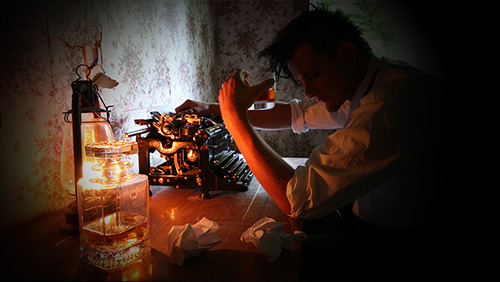 Have you always wanted to be a writer?

For as long as I can remember I wanted to be a professional footballer. As a child that’s all I did. My parents couldn’t afford electronic gadgetry and so I spent every waking hour, outside of school, kicking lumps out of a football.

Then I started drinking and taking drugs.

It wasn’t so much that the drink, and the drugs, created something wonderful to replace football – that wasn’t it – instead it robbed me of my breath. I started to cramp easily, I couldn’t breathe and I had a pain in my head that I assumed was an aneurism waiting patiently to turn out the lights.

Suddenly, everyone was running rings around me. I still had the skill, and the tenacity, but the damage was done. I just couldn’t run anymore. I needed a new dream.

So I replaced ‘professional footballer’ with ‘working in an office’.

Not exactly awe-inspiring is it?

I had no ambitions after I lost football. None. I just didn’t think like that. All I wanted to do was earn money so I could buy some flash clothes and hand the rest of my wages over to the guy running the local pub. The midweeks were an inconvenience, as I eagerly waited for the weekends to arrive so I could get off my tits.

The funny thing is I never really liked drinking, and I wasn’t very good at taking drugs. I suffered from the worse hangovers, I puked louder than anyone I knew, and I would hallucinate when smoking weed.

But I was so cool.

I was also a coward.

So how do I know I never really liked it?

When I got divorced, over four years go now; I decided to throw away everything that wasn’t critical to my existence. During the clear out I found around 30 poems, ramblings and songs that I wrote in 1996-97.

Here are some of the things that I wrote:

“A Picasso on the scabby wall leaning out of joint; tears cascading down the cheeks like dark rivers of the heart; key lock in the corner feeding on the point; It’s a start, it’s a start; my livers on the chart.”

“I need to wash away my spirits, I need to clean my soul. I no longer no my limits, drying out in the cold.”

“Monday to Friday people drinking vodka neat, curry houses lining both sides of the street; before the club it’s time for a treat; curries no more, it’s now drugs that we eat; a concoction of speed, cocaine and LSD; Orbit chewing gum and spearmint Wrigley.”

I woke up in the middle of a marriage going horribly wrong. It reminded me of one of those acid trips that I had experienced when I was younger. I knew that I had to do something, to change the situation, but I couldn’t get control.

The drunken life had taken over my being.

I was a very angry young man. I was choking on bills, I was consumed by the cries of the railwaymen, and my life was so unbalanced I kept falling over.

I was about to vanish into nothingness when I caught hold of the only thing that seemed to make sense to me, and it saved my life. Each time I argued with my wife we were both drunk. I decided that was the reason my marriage was falling apart. If I could save that, then I would have a foundation from which everything else could sit.

I gave up drinking.

A funny thing happens when you quit drinking.

The first thing that happens is you are coated in time. It gets everywhere. Twiddling your thumbs because a hobby, and this is one of the reasons that people relapse so often. They don’t know what to do with all of this time. Time that was previously taken up thinking about what drink to buy, where to buy it, when to drink it, who to share it with, when to go to the pub, what to wear, what to eat, before, during and after, who would look after the kids, who is going to drive, what about work the next day…fuck work the next day.

Things go back to normal.

I didn’t do that.

I filled my time with dreams. It was time to think of a new career for this professional footballer.

Creating a vision, breaking it down into actionable steps and then taking action takes a lot of time. These things do not happen when you are drinking. Your mind is wired differently. Instead of thinking, “What’s my life purpose?” You are thinking, “Three bottles for the price of a tenner…bargain.”

People say that drink and drugs are good for the creative soul.

I say fuck that.

That’s nothing but an excuse for a coward who refuses to come to terms with the fact that their lives are owned by a little maggot that lies at the bottom of a glass filled with poison.

In June 2010, Stephen King was asked to write a letter to his 16-year old self. King is a recovered alcoholic, and drug addict, who wrote some of his best work whilst off his tits.

This is that letter.

I’m writing to you from the year 2010, when I have reached the totally ridiculous age of sixty-two, in order to give you a piece of advice. It’s simple, really, just five-words: stay away from recreational drugs. You’ve got a lot of talent, and you’re going to make lots of people happy with your stories, but – unfortunately but true – you are also a junkie waiting to happen. If you don’t heed this letter and change the future, at least ten good years of your life – from the age 30 to 40 – are going to be a kind of dark eclipse where you disappoint a lot of people and fail to enjoy your own success. You will also come close to dying on several occasions. Do yourself a favor and enjoy a brighter, more productive world. Remember that, like love, resistance to temptation makes the heart grow stronger.”