Becky’s Affiliated: Rep. Youngblood on the imminent regulation of online gambling in Pennsylvania 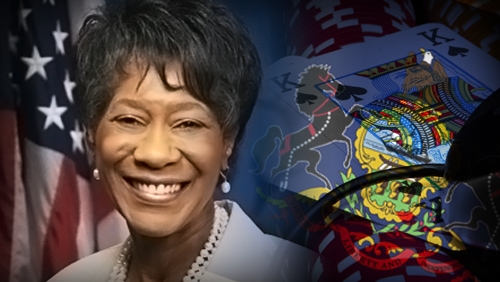 Online gambling regulation in America is finally starting to take shape, although it’s been a rather slow and painful process to observe.  Three US states have regulated online gambling within their borders with results so far that are less than impressive, now all eyes (and prayers) are on what states are next in line so the ball can really start rolling. While California promises to be the most lucrative state for online gambling in America due to its large population, it’s looking like Pennsylvania might be the next one on the US state iGaming regulation list.

Representative Rosita Youngblood has served in the Pennsylvania House of Representatives since 1994 and in 2011; she was appointed Democratic Chairwoman of the House Gaming Oversight Committee.  In this capacity, she is responsible for monitoring the policies surrounding Pennsylvania’s gaming industry, including online gambling once it’s regulated in the state.  At present, there are twelve licensed land-based casinos in Pennsylvania, generating $1.5 billion in annual tax revenue, leading the nation in gambling tax revenue with this number.

Rep. Youngblood is firing on all cylinders to get online gambling regulated in Pennsylvania.  She is a firm believer that there are far more pros than cons to welcoming online gambling within the state and she has dedicated resources and time to educating her peers and the people of Pennsylvania on why online gambling should be regulated and fast.  I was lucky enough to pin down the very busy Rep. Youngblood before GiGse 2014 to get her perspective on how things are going in Pennsylvania so far, what she is doing to speed the process along and what she has learned from the Nevada, New Jersey and Delaware.

Thank you very much for your time Rep. Youngblood, especially considering how busy you are at this time of year.  Can you start by giving us an update on the progress Pennsylvania has made towards online gambling regulation?

The Pennsylvania General Assembly did not include interactive gaming, or online gambling, as part of the final budget that was passed during the first week of July. There were definitely some discussions as to whether or not the Commonwealth should include it as part of the new revenue needed to stave off a severe budget deficit, or if the state should, at a minimum, add language to preserve our right to regulate this type of gaming moving forward amid growing concern of federal preemption.

But at the end of the day, the inclusion of any type of interactive gaming language was not a priority at this time to those who are in charge of the legislative process in Pennsylvania. We, as Democrats in the House, tried to include language in one of the budget-related bills that would have preserved Pennsylvania’s right to regulate iGaming—if and when we decided to do so—because we strongly believe that federal preemption would completely handcuff our ability to regulate our state’s gaming industry. That attempt was not successful, but I believe that there is enough momentum after the hearing I hosted on the issue back in May, and the hearing held in the state senate on a legislative report that highlighted the benefits of iGaming to the existing casino market in Pennsylvania, that when we reconvene in the Fall, we will take a serious look at the issue of iGaming and move the process forward. I know that I do not want to be standing here, years down the road, wishing we had done something with regard to iGaming and having it be too late because of a federal ban that restricted our ability to act as state lawmakers.

Okay, so what role, if any, should the Federal Government play in the regulation of iGaming within America?

The federal government should allow the states to have control over iGaming—similar to how they have historically allowed states to have control over all other aspects of gambling—from casinos to lotteries to horse racing. I understand the federal ban on sports betting, to a degree, but iGaming is not sports betting and it should be treated like all other gambling in the US.

Got it.  Can you elaborate on the hearing you hosted in May and how you plan to continue educating the government and the people of Pennsylvania on the benefits of iGaming regulation?

In May, the Pennsylvania House Democratic Policy Committee held a hearing on the issue of iGaming and the testimony provided that day was tremendously helpful in educating our Democratic members on the benefits to regulating iGaming in the Commonwealth. We had experts from all facets of the issue—including casino operators, internet gaming providers, industry partners, problem and compulsive gambling advocates, children and youth advocates, and consumer advocates all who highlighted the need for regulation. It wasn’t just the casinos lobbying our members in the halls of the State Capitol. This hearing provided insight as to why regulating the industry is the best way to provide protections for kids and addicted gamblers, and reduce fraud and money laundering.

It is my hope that when the House returns in September that the entire House Gaming Oversight Committee, both Republicans and Democrats, have a similar hearing where we can hear from advocates that represent the entire spectrum of iGaming. That is how you educate the members and the public on the issue and try to dispel many of the myths that still surround iGaming in the US.

From your perspective, what are the biggest benefits of iGaming regulation for Pennsylvania?

iGaming is more than just the legalization of online casinos or projected revenues for Commonwealth. There are very real consumer protection issues right now in the United States with regard to illegal websites offering iGaming to American customers. There are millions of Americans currently gambling online through unregulated, illegal websites that provide zero protection for problem and compulsive gamblers, zero protection against underage gambling, and zero protections against fraud and unscrupulous financial transactions. It’s a multi-billion dollar enterprise that had zero consumer protections. That, to me, is the single most important reason we need to move forward with iGaming before the federal government ties our hands on the issue.

I do know of internationally-regulated sites offering services to America that have solid protection for the consumer, but I’m sure there are rogue sites around so I can see your point.  Moving on, what kind of relationship do you envision between the land-based casinos and the online gambling sites that Pennsylvania will eventually offer within its borders?

What lessons have you learned from NV, NJ and DE so far?

Watching how iGaming has gone for New Jersey has been extremely important for Pennsylvania. Many of the growing pains they have seen early on we can learn from and do what we can to avoid them here in Pennsylvania. I know that many lawmakers in Pennsylvania are using New Jersey’s slow start as a reason to skeptical of iGaming from a revenue standpoint and that is why I have been working to educate my colleagues on the consumer protection side of the argument. We cannot just look at iGaming as new revenue or using it to meet some budget shortfall. I think that is where New Jersey went wrong to some degree—looking at iGaming as a savior to some budget problems.

We can also learn from what is working in these other states—and try to emulate the good things they are doing. Even though our gaming market is different from Las Vegas or Atlantic City, it is very helpful to see how this new industry evolves over time. We can’t look at New Jersey or Nevada and say, “Let’s do it exactly the same way!” But we can use their experiences as a guide moving forward.

Every time I talk to someone about Pennsylvania’s gaming industry, I have to plug all of the good things we have done in a very short amount of time. Pennsylvania has quickly become a leading gaming market in the U.S.—ranking 2nd in total gross revenue from gaming—just behind Nevada. And because we placed a high priority on the state’s return on gaming through higher taxes, we lead the nation in tax revenues generated from gaming. We are a unique market but we are not immune to the problems facing other gambling states. We are slightly different than Nevada and New Jersey; we are not considered a gambling tourist destination. Although we do attract folks from across the borders in neighboring states, many are visiting other aspects of Pennsylvania in addition to our casinos. Philadelphia is a great example of this.

So we cannot look at Nevada or New Jersey and do it exactly like them…but we can certainly see what is working and what isn’t and adjust our regulations accordingly.

Wow, I was not aware of the healthy gross and tax revenue numbers that are currently generated from gambling in Pennsylvania, thanks for sharing.  So tell me, why is it important to you to have a presence at events such as WrB and the upcoming GiGse?

I think it’s vital for Pennsylvania to have representation at events and conferences like GiGse that provide a forum for debate and discussion on very important policy issues. As I have said over and over, Pennsylvania is a leader in gaming and we rely on the economic impacts that this industry has provided. When it comes to expansion, or new approaches, we need to be there to be part of the conversation. This goes back to a question asked earlier; we can learn so much through the experiences of others and I hope that my office’s participation in GiGse this summer will grow our understanding of the issues, while also offering our own experiences to help others who are looking to follow our lead.

In Pennsylvania, we have become shareholders in the industry and we have worked with, not against, the industry to ensure that taxpayers are the #1 priority. And it has been a great working relationship. As we move forward with new technologies and new approaches, I am confident that this relationship will continue to provide significant benefits and protections to the people of Pennsylvania.

Sounds great, Rep. Youngblood, is there anything else that you want to add?

I am eager to learn more about the growing iGaming industry during the GiGse event and I am hopeful that what we learn can be applied to the policy debate this fall in Harrisburg. I believe that Pennsylvania needs to move forward with an iGaming regulatory policy sooner, rather than later, and I am hopeful that we can put a policy in place before the end of the year.

And so are we.  Thank you so much for your time Rep. Youngblood and we look forward to seeing your team at GiGse next week.