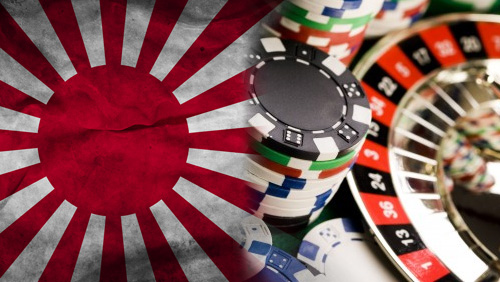 Thousands of glittering metal balls trickle through sparkly pins while hyper-musculatured anime cartoons flash themselves at you in glaring colors in the middle of the screen, all the while thick cigarette smoke blurs your vision of anything but the machine and coffee keeps you staring wired at the game. Pachinko is an epileptic’s worst nightmare. But the Japanese love it.

Pachinko is like one of those interstellar phenomena that physicists can’t explain about the universe because it breaks all the known laws of physics—even those quantum mechanics laws of physics that themselves break the laws of physics. For a country that has strict laws against gambling, the Pachinko industry is on fire in Japan and has been for quite some time. According to the BBC, Pachinko generated over ¥30T in profit last year. That translates to about $296B.

How is this possible if gambling is illegal in Japan? The answer is an eye-roller, beyond silly but the implications of it are very important for those who intent on making a move on any potential Japanese gambling legalization moves in the near future. Much like bingo is singled out for special treatment in the US so is Pachinko in Japan. Technically, gambling for cash is illegal in the land of the red sun. So instead of gambling for cash, Pachinko gamers cash in their shiny little ball bearings for shiny plastic tokens, which they then bring immediately over to an independently owned TUC (Tokyo Union Circulation) which gives them cash. The TUC then trades the tokens back to the original Pachinko parlor for cash. The TUC pockets the difference, the Pachinko parlor attracts those who want to gamble for cash and the inane anti-gambling laws passed by Japanese politicians are completely ignored in practice.

So basically, you have the same setup as legitimate straight-up gambling, except a small profit percentage is skimmed off in commission to TUC outfits instead of pocketed by the parlor. That and gamblers have to make two exchanges instead of one and walk across the street to get their cash winnings instead of go across the hall.

How did it come to work out this way? Originally, Pachinkowas legal simply as a game to win prizes, like ski ball for tokens and other arcade games where you can get tokens or tickets and hand them in for a teddy bear or a plastic yo-yo. When people started wanting cash instead of tokens for obvious reasons, the yakuza or Japanese mafia saw a market need and specializing in the illegal, they filled that need. But as with all voluntary activities made illegal, law enforcement usually isn’t involved so things tend to get brutal when inevitable conflicts arise.

But then a miracle happened. Instead of instituting the equivalent of the War on Drugs against Pachinko mafia cashiers, the Japanese authorities actually did the smart thing and legalized the TUC’s, putting the police in charge instead of the yakuza. To help the stateapparatus save face, it required the TUC’s to be independently-owned and separate from the parlors so that technically speaking, the all-wise politicians’ laws would be respected and venerated even though they are being totally ignored in practice.

Here’s where Japanese casino legalization comes in. Shinzo Abe is pro-legalization and the word on the street is that the so-called casino study bill, which is currently being debated in the Japanese parliament, looks set to pass eventually. So is this the time to start buying up Japanese pachinko companies like Universal and Konami?

The answer is no. Not by a longshot. First of all, the legalization process itself is going to take a long time. The consensus is it’s a long shot even by the 2020 Tokyo Olympic Games. This casino study bill is just that—merely a bill to study the issue further, and this study bill itself has been years in the making with debate delayed by other politicians in the inevitably political give-and-take over nothing. This bill is like a pre-engagement ring procured out of a Cracker Jack box. Don’t get too excited about it.

Never mind the issue of legalization itself, because as we’ve just said, gambling at least in Pachinko form is basically already legal. That means the pachinko market is already operating at or near the maximum revenue point and further legalization won’t do much to change that. ¥30T a year is evidence enough that no technical legalization will significantly increase playing volume just because now you can get cash from within the pachinko parlor itself instead of taking that arduous two-minute stroll to the TUC right across the street.

Full legalization will not be entirely meaningless though. For traders, passage of the Casino Study Act could act as a short-term burst for Japanese gaming stocks even though longer term it should have no distinguishable effect. So right before the vote, do consider taking a very short term position in Japanese gaming equities but sell it two or three days after the bill passes.

That’s just a quick way to make a few yen but there are some long-term implications as well. The Pachinko market is large enough to tell you one thing: There are a lot of gamblers in Japan. Full legalization will not change the size of the Pachinko market itself but it will allow the presence of the classic casino hotel and resort—something too risky now without the explicit and obvious blessing of the Japanese government as evidenced only by full legalization. These resorts could then rake-off some of the Pachinko market to themselves. More importantly, full Japanese legalization could create the next Macau, which could turn out to be crucial as China teeters and falls. The long-term investment implications then are that the companies currently in Macau that are the first to move to Japan upon legalization will be the ones to survive and recover from any trouble there.

Just like Macau is mainly baccarat, Japan wherever they may end up setting up their gambling province will still be mainly Pachinko. Each country and culture has its favorite game. The only difference is that resorts will succeed in attracting foreigners en masse where smoke-filled Pachinko parlors have failed.

As for the monetary outlook in Japan, it is almost the mirror image of China. While China is pulling back from the presses, Shinzo Abe and his administration are intent on printing money until the country runs out of paper and the yen falls through a bottomless pit. There are no signs of stopping and as the yen continues to fall, foreign currency (the renminbi especially) will become more and more valuable, filling Japan with foreign tourists in its gambling districts.

If a given amount of yuan can buy you twice as many shiny Pachinko balls in Tokyo as hands of baccarat in Macau, you’ll get your money’s worth in Tokyo. For the average consumer, rising prices in yen terms will damage the native Japanese. But foreigners looking to gamble with some foreign currency in their hands will prosper, as well any future legalized Japanese gambling district.