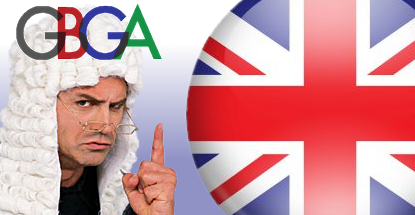 The Gibraltar Betting and Gaming Association (GBGA) has put the UK government on notice that it intends to mount a legal challenge of the country’s “unlawful” new gambling law. The UK officially approved legislation last month that will require all UK-facing online gambling operators to hold a license issued by the UK Gambling Commission in order to advertise their wares to UK punters. The new law will also impose a 15% point-of-consumption tax (POCT) on all online wagers placed in the UK as of Dec. 1.

On Wednesday, the GBGA – whose membership includes William Hill, Bet365, Ladbrokes and others – informed the UK government and the Gambling Commission that it intends to seek a judicial review of the Gambling (Licensing and Advertising) Act 2014. The GBGA argues that the Act breaches Article 56 of the Treaty on the Functioning of the European Union (TFEU), which prohibits EU countries from restricting the free movement of services between member states.

The GBGA further argues that the Act is unnecessary, given Gibraltar’s status as “one of the most effective regulatory regimes in the world.” The GBGA says the UK has failed to adequately consider its “passporting” proposal, in which veteran regulators like Gibraltar would retain responsibility for overseeing their own licensees while sharing info with the Gambling Commission.

The GBGA says the UK is attempting to set itself up as a global gambling cop by “threatening to criminalize companies and people who fail to submit to its regime.” The GBGA doesn’t think the UK is up to this challenge, given that the Gambling Commission has been granted “no extra-territorial information gathering or enforcement powers.”

The UK government insists that the Act is intended to protect consumers but the GBGA’s legal eagles say the Act’s measures “are neither reasonable nor proportionate to achieving that goal and are likely to have adverse consequences for consumers.” The GBGA argues that the Act will drive UK punters into the arms of “unregulated or poorly regulated operators.”

The GBGA has given the government 14 days in which to respond before it releases the judicial kraken. So far, the UK government has said only that it has received the GBGA’s missive and will “respond in due course.”