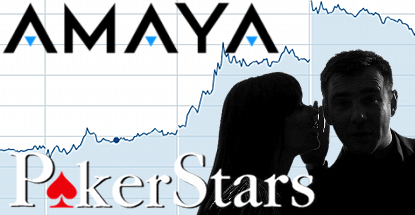 Shares in Canadian gambling technology firm Amaya Gaming Group gained 3% on Monday to close out the day at $10.55. Before the close, the stock had traded as high as $11.36 until speculators decided to cash in on the run-up. Regardless, the stock has gained 31% in its last five days of trading, despite no significant company news during that time beyond the signing of a game content deal with Swedish online gambling operator Cherry AB. With all due respect to Cherry, it’s clear that something else was kicking in Amaya’s economic afterburners.

On Saturday, CalvinAyre.com published a report that Amaya was talking with online poker giant PokerStars regarding some kind of tie-up that would enable the beloved Stars brand and software to return to regulated online gambling markets in the United States. With neither Amaya nor Stars willing to officially confirm or deny the report, some observers have dismissed the news as idle speculation, but we maintain that our sources were solid.

In response to trading activity that may stem from market rumours that have come to the company’s attention regarding a potential strategic acquisition, Amaya Gaming Group Inc. (AYA.TO) stated today that strategic acquisitions have been and are one component of the company’s growth strategy and, as such, Amaya regularly evaluates potential acquisition opportunities. From time to time, this process leads to discussions with potential acquisition targets. There can be no assurance that any such discussions will ultimately lead to a transaction. As a general policy, Amaya does not publicly comment on potential acquisitions unless and until a binding legal agreement has been signed. The company intends to make no further comment or release regarding current market rumours unless and until such comment is warranted.

On May 20, Industrial Alliance Securities analyst Neil Lindsell noted that Amaya was likely planning to sell its Ongame poker network in order to “’trade up’ to a larger platform.” The question remains… How much larger are we talking about?