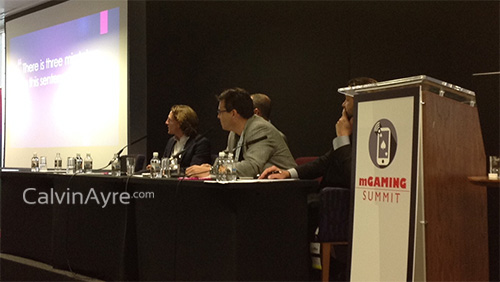 The annual mGaming Summit took place today alongside the mPayments Summit at the Dexter House in London, a joint venture between Telemedia and iGaming Business.  Mobile everything has positioned itselfat the front and center of the online gambling industry for several years now, but has picked up momentum in 2014 and for the unforeseeable future.

Roughly one hundred professionals gathered today to mix and mingle with each other and the expert speakers at the mGaming Summit.  Organizer and moderator Michael Caselli explained that thirty minute networking breaks and a long lunch were purposely built into the schedule based on delegate feedback and to facilitate networking.  The timing of the sessions and breaks felt right and the day flew by without a hitch, with a number of delegates sharing their thoughts on how good the presentations were.

Today’s mGaming Summit featured a carefully selected group of speakers and panellists talking on relevant topics ranging from innovation, payments, push notifications, case studies, social and more.  Despite the subject matter of each individual session, the topic of innovation in mobile gambling was brought up over and over again, a sign that great opportunitylies in the mobile sector.

So what leads to innovation in the mobile gambling space? This was a question raised by Caselli at the start of the Innovation in Mobile Gaming panel featuring Alex Czajkowski of AgencyLex, Leigh Nissim of IGT and Andrew Hughes of Abzorba Games.  This fiery group had differing opinions on innovation in the online gambling industry with Czajkowski claiming our industry is lacking innovation while Nissim and Hughes whole heartedly disagreed.

To break down the arguments, Czajkowskisaid that from an operator perspective there has not been a lot of innovation because operators tend to have a “short term perspective”- they are so attracted to hitting their numbers and getting their bonuses that they fail to innovate, he said.  Czajkowski believes operators should work on innovative ways to make emotional connections with players and build their brand beyond just online gambling,“like Bodog back in 2004”, he said.

On the other hand, Nissim said the online gambling industry is full of innovation and he went on to list innovations such as the development of geolocation technology, in-play betting, cash out functions and speed poker.  Nissim also pointed out that IGT runs an internal program called “innovation week”, during which employees get together in groups and come up with innovations, two of which were actually brought to market.

Hughes added that innovation is happening in the social space and that this is the cheapest way of doing it- the lack of regulation in social brings down barriers and serves as a great test bed for real money operators.  He also believes that innovation comes from enabling the gamers to allow their creativity to come into play, for example, build their own avatars, send virtual cocktails and have chats.  “We allow the gamers themselves to innovate and this is the magic we think”, said Hughes.

Despite their differences, all three panellists did agree that Betfair and PKR developed disruptive technology within the online gambling space, something that is worth pointing out and kudos to these two organizations.

Another one of today’s most productive sessions was delivered by the Johan Styren, CEO of LeoVegas, a company that used a “mobile first” strategy to enter a highly competitive market.  Some of Styren’s main points included that operators have more retention ability with mobile than with PC, the click-through rate of mobile ads hovers around 4%, about 100 times the average CTR on the web, the fraud risk is lower, cost of acquisition is lower and the ability to use SMS to communicate with customer is much more effective than email.

An interesting point made by Styren is that even though we all know that mobile and tablet are the way of the future, the online gambling industry in general falls behind other industries on tablet offerings.  He advised that keeping customers active on every device possible increases loyalty and his finals words were, “make tablet your priority in 2014 or you will be left behind”.

When it comes to mobile payments, we heard from Ben West of Worldpay and Jon Prideuaxof Boku that the innovation will be in removing the friction when paying for goods online.  Prideuax made the point that “invisible payments” are the future and that we want to move towards “the act of buying is the same act of paying” model, in other words, customers want to pay for their item without even knowing about it (think Hailo).

Rounding out the day was another excellent presentation from Dorothy Creaven, CEO of Element Wave and recipient of the EiG Launch Pad first place prize in 2013.  Creaven shared a series of impressive numbers with the audience, all supporting the fact that we, as online gambling operators, should be looking at mobile first and that push notifications are one of the best ways to communicate with customers, so long as its done right.

Some of those numbers include:

*Sending the right push notifications can double your player retention

*It takes three seconds to send out a push notification to thousands of users (using Element Wave’s platform, of course)

*Mobile makes up 40-50% of online gambling revenue- think mobile first and mobile only.

Creaven confirmed the key to successful push notification delivery is to avoid generic messaging and listen to what your players want. “Catch the right user and the right time and deliver them an offer you know they will be interested in”, she said.  For more tips on how to create powerful pushes Creavenprovided a link to her free “Push Engagement Pack”, something we highly recommend downloading if you’re operating in the mobile gambling space.