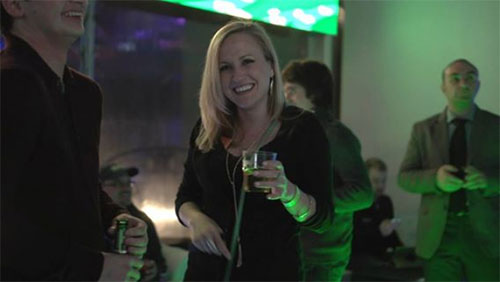 Lee Davy continues his Life Outside of Poker series with a look at the life of Jamie Kerstetter and her interest in soccer and marathon running.

Jamie Kerstetter is a former lawyer who decided to leave all the bad jokes behind her to instead concentrate on a career as a professional poker player.

Some may say that was a foolhardy decision.

Since the return of online poker to the state of New Jersey, Jamie has moved into Atlantic City where she now represents Team PartyPoker as an ambassador for the site.

So she’s smart, lucky and can throw off a bluff or two.

But did you know that she was an exceptional soccer player and marathon runner?

“I first kicked a ball when I was around four years of age. My Dad was in love with soccer and so it was the first sport that I was introduced to, and I have loved it ever since. I would play on traveling teams all around the country, and Canada, and I used to get so excited about playing every Sunday.”

When did it really start to get serious for you?

“In the U.S the college soccer scene is purely at an amateur level. There are three divisions and Rutgers played in the top division. I was a Rutgers fan and when I was 17 I tried out for the team and made it.

“We had a superb team and we qualified for the NCAA tournament, and made the sweet sixteen, which was a huge accomplishment for our sports program.”

Did you ever want to become professional?

“I did at one time, but I was never good enough to make it, but am really proud to have played at the highest college level. I am not very tall and some of the girls who I was playing with were just beasts. They were so much taller and heavier set than me, so I knew I was always going to be facing an uphill battle. I worked insanely hard, and loved the game just as much as anyone else, I just didn’t have the natural ability required to make it to the very top.”

Was your father a professional player?

“He wasn’t a professional, but he was crazy in love with the game. He’s the reason that I am so super competitive about everything. When you are four years of age everyone just runs to the ball, but my Dad would always try and teach me to be more strategic, even at the age of four, which is pretty cute.

“I also have an older brother and sister who used to kick my ass all of the time and that helped me get used to playing with bigger and stronger players as I got older.”

Why are the U.S female players so good at soccer?

“I’m not sure, but you are right, we are exceptionally talented when it comes to soccer. Carly Lloyd, who scored in the Olympic final in 2008, played with me at Rutgers. She is a really nice girl, and an exceptionally hard worker. Having the experience of playing with her and watching her get to the very top is very rewarding.”

Do you have a favorite team or player?

“I don’t have a favorite team because I never really watched a lot of soccer when I was younger because the coverage is so heavily weighted towards American Football, Basketball and Baseball; but I thought Mia Hamm was such a great role model. A really great player who was so humble.

“I also had a huge crush on Alexi Lalas. Before I went to Rutgers to play I used to watch them play and they were my heroes. I remember him having this crazy red flowing hair and he made soccer seem so much fun.”

Do you still play now?

“Last summer I played with a bunch of poker players like Byron Kaverman, Jeff Gross, Matt Waxman and Kristy Arnett. I thought it would be really easy and they kicked my ass. They were all in great shape. We played four games in one day and the next day in the Rio I was so sore.

“There were also some Europeans playing and they were so good. I don’t know what it is about Europeans and football, you must have footballs in the womb or something.

“I will be playing again this summer because I think it’s so important to keep in shape during the series, as this helps, especially when poker is not going as well as it could be.”

I believe you have ran five marathons is that right?

“I ran track at Rutgers and was a long distance runner. I would run 70 miles per week which was nuts. When I graduated and went to law school, I had to give up a lot of the stuff I did for fun, but I made sure I kept on running.

“I would run an hour a day and then one day decided to run the Detroit marathon. I ran a really good time and it was a really tough mental experience. It was crazy and makes you push through so much negativity in your mind. I think everyone should run some sort of race to get the benefit of the sorts of tough mental challenges you will face.

“My time was good enough to qualify for the Boston marathon so I ran that as well, and then kept running different ones every few months thereafter.”

What is your fastest time?

How do you prepare for a marathon?

“You just have a training plan. You can’t just lead a life where you are doing nothing but eating doughnuts and then think you can get back to it. My roommate does a lot of meditation and tries to get me on board, but running is as close to meditation as I can get. When you are so physically tired you don’t have time to worry about stress. It can be very therapeutic in that way.

“If your poker game is not going well during the series, working out is so important, because it will help sort you out mentally.”

Do you have any plans to run during the series?

“There are two half marathons in the summer. I have run the Lake Mead one before, with Andrew Badecker, and it was nice for the first few miles, but at the end it was tortuous because there is nowhere to hide. I might skip that one and try the one at Red Rock instead. Hopefully, there will be more shade in that one.

“Beginners can look up some really good schedules at RunnersWorld.com It will give you the slowest progression because you really have to take your time and build your way up to it. You need 3-4 months before you can build up to a marathon. The progression is slow and you need to be committed. There will be days when you don’t want to run, but if the schedule says run then get to it. The preparation just feels like a job, and you get used to it after a while.”