Home / Business / Is ignorance behind Americans’ preference for legal weed over online gambling? 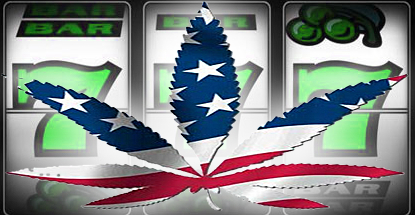 Faced with an either/or ‘gun to your head’ choice, 52% would spark a blunt while 20% preferred an online punt. Around 18% of negative nellies voted for ‘none of the above’ while a libertine 4% wanted to get high AND gamble. Men were more in favor (34%) of online gambling than women (20%). Political affiliation mattered little in how one voted, with Democrats only slightly more in favor (27%) of online gambling than Republicans (24%).

Respondents’ age played a role in opposition to online gambling, but not as much as one might suspect. People 60 years old and above were 77% opposed, while those in the 45-59 bracket were 71% agin’ it. Gen X’ers aged 30-44 were 50% opposed while even those millennial whippersnappers in the 18-29 demo were 49% opposed, Those expressing support for online gambling followed a similar pattern, ranging from 15% of old fogeys to 38% of young ‘uns.

Support for recreational reefer madness was also age-related, with 36% of seniors in favor vs. 65% of the youngest demo. Unlike online gambling, the political split over pot was far more pronounced, with 63% of Dems okay with inhaling vs. just 32% of Republicans. If forced to make an either/or choice, Republicans were more likely (29%) than Dems (17%) to choose to legalize online gambling instead of marijuana.

FEAR OF THE DARK
However, a closer look at the numbers reveal that Americans are paying far more attention to marijuana legalization efforts than they are to online gambling initiatives. Some 86% of respondents had heard ‘a lot’ or ‘some’ about marijuana legalization, compared to just 34% who were familiar with online gambling legal pushes. In fact, 44% of respondents had heard “nothing at all” about online gambling legalization compared to just 3% for marijuana know-nothings. These figures suggest that the more one hears about a subject, the less one fears the unknown (ignorance = intolerance).

Given America’s newfound embrace of sensibility (and sinsemilla), perhaps online gambling advocates need to start emphasizing gambling as a recreational drug. Former New Jersey Division of Gaming Enforcement chief Thomas O’Brien once described the main product of Atlantic City casinos as “adrenaline: a biological substance capable of producing excitement–highs and generated usually by anticipation or expectation of a future event, especially when the outcome of that event is in doubt.”

Then again, marijuana’s positive numbers may also have been skewed by its reputation for helping people deal with a host of medical issues, from epilepsy to glaucoma to cancer patients dealing with the aftereffects of chemotherapy. Maybe online gambling advocates need to do a better job promoting gambling’s acknowledged health benefits, as detailed in Dr. Patrick Basham’s book Gambling: A Healthy Bet. You might even want to spark a doobie before cracking the cover.

Marijuana lounges coming to Vegas, but don’t expect them in casinos
Erik Gibbs
3 May 2019