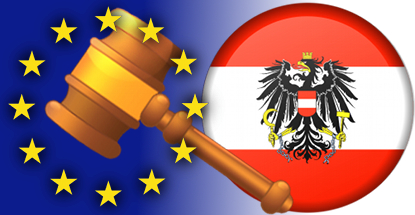 Austria’s gambling laws are noncompliant with European Union law, according to a ruling handed down by the Court of Justice for the European Union (CJEU) on Wednesday. The CJEU ruled that Austria’s laws weren’t being applied in a consistent and non-hypocritical manner, i.e. the laws appeared less concerned with reducing Austrians’ capacity to blow their money on gambling and more concerned with reducing Austrians’ capacity to gamble with operators not paying Austrian taxes.

The 2012 Pfleger case was named after applicant Robert Pfleger, one of several applicants that had gotten in hot water for allegedly operating Czech-built gaming machines without a license in Austrian inns and gas stations. Pfleger et al asked the CJEU to consider whether Austria’s restrictive gambling laws fell afoul of Article 56 of the Treaty on the Functioning of the European Union (TFEU), which prohibits member states from restricting the free movement of services between member states.

In November, CJEU Advocate General Eleanor Sharpston issued a non-binding opinion on the matter, saying Austria’s licensed gambling operators were advertising their wares in a way that “aims to expand the overall market for gaming activities rather than channeling the existing market to certain providers. Such an expansionist commercial policy is plainly inconsistent with an aim of achieving a high level of protection for consumers.”

On Wednesday, the CJEU agreed with Sharpston, saying Austria’s laws appeared more concerned with increasing tax revenue than with keeping a lid on Austrians’ gambling habits. The CJEU said Article 56 precluded national legislation when said legislation “does not actually pursue the objective of protecting gamblers or fighting crime … in a consistent and systematic manner.” The CJEU also ruled that the burden of proof for justifying such restrictive legislation lay with the member state.

The European Gaming & Betting Association (EGBA) applauded the CJEU’s ruling, noting that it had also confirmed the applicability of the Charter of Fundamental Rights to gambling issues, the first time the CJEU has cited the Charter in a gambling-related case. However, the EGBA reminded the European Commission that it had warned six other member states over similarly restrictive legislation last November and urged the EC to “take the appropriate next steps in these proceedings and open new proceedings where necessary.”