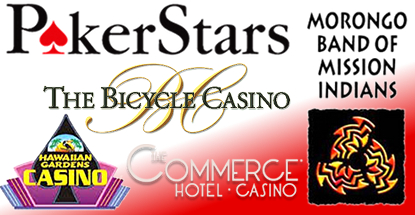 The parent company of online poker giant PokerStars has inked a deal to provide its online poker platform to California’s Morongo Band of Mission Indians and the state’s three largest card clubs in a future regulated intrastate online poker market. The deal was announced while California legislators were conducting an informational hearing on online poker in which PokerStars featured prominently, although it was never once referred to by name.

The specifics of the deal involve the Rational Group, the Morongo Band, the Commerce Club, Hawaiian Gardens Casino and the Bicycle Casino. PokerStars would “act as the subcontractor providing the online poker platform and related services” for a website owned and operated by the Tribe and the card clubs. The parties will collectively work toward ensuring that the state pass legislation that would make the partnership a reality. Last month, rumours circulated that the parties were were working together to ensure any legislation passed didn’t unfairly exclude operators to provide a competitive advantage to other operators.

The Tribe and card clubs involved in the deal were PokerStars’ most vociferous defenders at Wednesday’s hearing at the state Assembly, which devoted an inordinate amount of time to whether the online poker giant had a right to participate in California’s online poker market or if it would be given a fair chance at passing regulatory muster. In contrast, the majority of the tribes attending the hearing were intent on ensuring the state’s online poker legislation – rather than the state’s online poker regulations – contained language that would institute a blanket ban on PokerStars and other ‘bad actors’ from participating in the state’s regulated market.