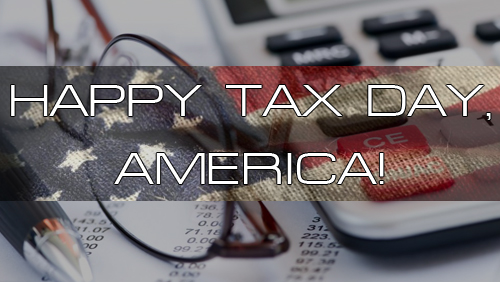 If you routinely harassed people going about their everyday business, engaged in industrial espionage, committed murder, and stole from the poor to give to the rich, chances are your future wouldn’t be too bright. But if you use the threat of force to coerce people into giving you the kind of money that can fund the commission of crimes like these on a regular basis? Then you’re just the United States federal government.

Today is Tax Day, the final day for Americans to file their tax returns for the previous year and, if they didn’t pony up their taxes ahead of time through withholding or estimated tax payments, cut a check to Washington in exchange for the right to continue to drawing breath outside prison walls. In 2011, the most recent year for which the IRS currently has published data, more than 163 million Americans tax returns were represented on 145 million tax returns. Thanks to exemptions and deductions for a full spectrum of reasons, from the humanitarian to the nakedly political, more than 76 million of them paid no federal income tax, including 24,000 in the top one percent of all income earners. The other 87 million Americans were on the hook for some $1.1 trillion in income taxes, which fund about one-third of the operations of an enormous range of programs, good and bad, managed by the government.

The American people are supposed to have a say in how all this money is spent through the election of representatives, but those politicians only tend to listen to people while they’re campaigning for their jobs. Once they’ve been sworn in they’re much more responsive to corporations and interest groups than they are to the people at large, resulting in a situation where the budget reflects those groups’ priorities rather than those of the people. Programs that take up small or even minuscule amounts of the overall budget – like the .02 percent spent on the Corporation for Public Broadcasting, the .03 percent spent on the US Postal Service, or the 0.59 percent spent on welfare – are often attacked by politicians with particular viciousness. Meanwhile, gross financial mismanagement in politically powerful departments goes unaddressed, billions are shelled out annually in unnecessary insurance subsidies, and a stunning array of harmful programs and practices are regularly overlooked..

The largest chunk of the American people’s tax money – 27 cents from every dollar – goes to the military. This includes the continued prosecution of a directionless war in Afghanistan, which has cost American taxpayers more than $710 billion since 2001. It covers Special Forces operations on six of the seven continents, in more than 100 foreign countries. It funds DARPA, the defense research agency that invented the internet and is on the forefront of hacking cars and the body. The Black Budget fits in here as well, including the National Security Agency’s $10 billion annual price tag. But benefits for military veterans aren’t included; they cost another 5.1 cents on the dollar and are constantly in danger of being slashed while the active military gets basically whatever it asks for.

You don’t have to represent an enormous amount of money for your department to wreak havoc in the U.S. and abroad, though. The Department of Justice’s $27.6 billion budget for 2014 covers some 40 agencies and divisions including the Federal Bureau of Investigation, which has cleared its agents in each of the more than 150 shooting incidents they have been involved in since 1993, conducted widespread surveillance of peaceful domestic political organizations, and participated in military operations in foreign countries with the military’s Joint Special Operations Command. It covers the operations of all the U.S. Attorneys across the country, including the likes of online poker’s ambitious Black Friday antagonist, Preet Bharara. It also funds the Bureau of Prisons, which houses eight times more prisoners convicted of drug crimes as it does prisoners who have committed violent crimes; the Drug Enforcement Agency, which harasses gardeners on flimsy evidence, hoping that they turn out to be criminals, while its own agents are bribed by Mexican cartels; and the Bureau of Alcohol, Tobacco, and Firearms, which supplied those same Mexican drug cartels it was investigating with guns used to commit heinous crimes in its ill-advised and now infamous Operation Fast And Furious.

Perhaps the most egregious of all the mismanaged federal agencies with smallish budgets is the Securities and Exchange Commission. With a total cost of under $2 billion and a mission to “protect investors; maintain fair, orderly, and efficient markets; and facilitate capital formation,” the SEC is tasked with overseeing the U.S. banking and finance sector, which wrecked the world economy in 2008 thanks to numerous questionable practices. But the agency stinks of regulatory capture. Its head of enforcement, who served as General Counsel for Deutsche Bank prior to working for the SEC, undercut his agency’s mission by declining the advice of its own attorneys to pursue a case against Goldman Sachs for marketing toxic Collateralized Debt Obligations before the 2008 crisis, likely because it would bring up similar practices at Deutsche Bank while he worked for that company. The other agencies on this list ruin lives one at a time, but the SEC’s failure to make Wall Street pay for its crimes in 2008, which essentially sums up the majority of its responsibilities, leaves those companies free to potentially ruin millions more in one fell swoop.

Whatever your taste, there’s something to disgust you in the government’s expenditures. Just don’t decline to pay your share, lest you end up representing part of the Bureau of Prisons line-item yourself.