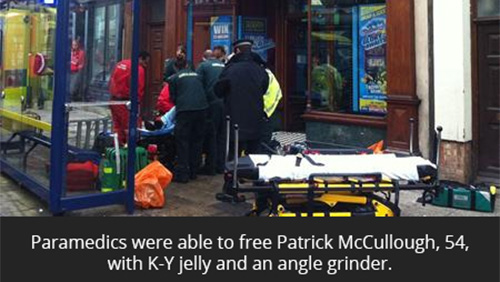 It was a very unlucky day for Essex-born Patrick McCullough, 54, who had to be rescued by paramedics last Friday after his penis became stuck in a fruit machine.

This bizarre incident, reported by Roulette.co.uk, occurred at a bookmaker in Hornchurch, Essex at approximately 8PM on March 28. According to the manager of the premises (who asked not to be named) Mr McCullough fell afoul of an anti-theft mechanism, built into all adaptive logic UK slot machines as standard.

“It was definitely a career first for me,” the manager commented. “One minute he was raving like a lunatic and the next he’d stuck his ‘wotsit’ in the machine. You couldn’t make it up!”

Mr McCullough allegedly staggered into the bookmaker while visibly intoxicated and proceeded to get into an altercation with security.

In a statement, Ms. Patricia Staker, 38 (who was present at the bookmaker on Friday) said she was “traumatised” by the events she witnessed.

“After the cashier man told him [McCullough] to clear off, that’s when he really started getting nasty.”

McCullough’s behaviour apparently took a turn for the worse after he was asked to leave, culminating in an indecent assault on a nearby fruit machine.

“He just dropped his pants and launched himself at this machine,” Ms. Staker recalled. “For a while he seemed to be enjoying himself, until we heard this ‘chunk’ noise and he started wailing like a guillotine had come down on him. Served him right.”

A bell and two cherries

Paramedics who arrived on the scene were forced to act quickly with an angle grinder and K-Y jelly to prevent irreparable damage to Mr McCullough.

A statement from hospital management stated that their patient had undergone a “harrowing experience” and requested that the press respect his privacy at this difficult time: “In the case of such a sensitive injury, we believe it is necessary to consider [Mr McCullough’s] dignity and wellbeing all else.”

The fruit machine has been permanently decommissioned. The manufacturer, Fruity Bell Games, have pledged to review the security measures installed in their products to prevent such occurrences in future.

In a press release, Fruity Bell admitted that the machine’s security mechanism should never have permitted anything larger than a coin: “Obviously we tend to work with averages, but people come in all shapes and sizes and our safety protocols need to reflect that.”

McCullough is currently in recovery and has, as-yet, declined to comment on this incident.

Should the bookmaker in question choose to pursue legal action, he could face up to a year in prison for indecent exposure.